Singapore -- Secret agent Ethan Hunt (played by Tom Cruise) takes on another impossible mission. Of course, we all know the mission is far from impossible in nature. Improbable in terms of easy accomplishment maybe - due to the great odds he had to face, but nevertheless, a mission possible. 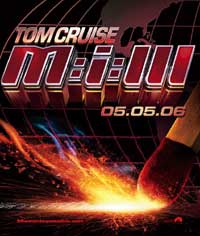 He works undercover for IMF (Impossible Mission Force), which takes on special spy missions of the greatest levels of difficulty. It struck me that the entire host of innumerable worldly and enlightened Bodhisattvas in the universe can be likened to being members of a Spiritualised version of IMF. SIMF!

While Hunt's mission was to search and rescue missing persons, including his kidnapped wife, every Bodhisattva's mission is to seek existentially dissatisfied sentient beings, so as to rescue them from Samsara with the Dharma. Seeing all beings with unbounded compassion and equanimity, all are family, not just one's beloved spouse.

Like Agent Hunt, who went through great measures to conceal his secret identity from his wife, so as to prevent endangering her and causing her worry, a skilful Bodhisattva too, often humbly conceals his or her compassionate commitments from others. This is especially true when they are not out for fame, which might instead impede the efficiency of their "missionary" work. Is there a secret Bodhisattva in your life? Are you a secret Bodhisattva in others' lives?

Customary in every Mission Impossible instalment, Hunt is "delegated" a mission out of no obligations - via a recorded message which self-destroys after playing - "Your mission is.... should you choose to accept it." But of course, he accepts it, hence is there a story to watch. Likewise, every Bodhisattva has no obligation to better the world on the whole, or to help anyone to be free from suffering. But every good and willing Bodhisattva, out of overwhelming compassion, voluntarily takes up the "Mission Impossible" to benefit both individuals and the masses - for as long as it takes for all to be spiritually rescued.

Hunt gets involved in securing the "Rabbit's Foot", which is no lucky charm. It is the codename of a mysteriously ominous secret weapon of possibly unstoppable destructive power. In this sense, the Rabbit's Foot represents everything that is evil in the world, being invented by the evil for wholly evil purposes. It was the objectification of the three poisons of greed, hatred and delusion collectively. Hunt realises the potential havoc it could wreck onto the world, and does everything in his power to ensure it does not fall in the hands of the seemingly incorrigible and Mara-like villain (played by Phillip Seymour Hoffman). But of course, even Mara has a chance for Enlightenment - if he repents his ways and cultivates the Dharma! What would you do in Hunt's situation? Would you be a "natural Bodhisattva" without second thought or regard for your own life too?

Halfway through the story, with his fellow IMF agents, Hunt had to retreat from the enemy, so as to rest, reflect and plan for their next best course of action. This reminds us of the purpose of attending spiritual retreats - which are not so much to escape from the world, but to prepare ourselves to face it better equipped, with greater compassion and wisdom. Just like a lotus can blossom unstained by the mud it sprouts from, renunciation of the world is not needed as long as there is renunciation of worldly defilements. Thus are accomplished Bodhisattvas capable of serving all beings in the world without being tainted by anything worldly.

An interesting scene might had caught the attention of Buddhist audiences in M:i:III. Zhen Lei (another IMF agent, played by Maggie Q) was shown chanting under her breath. The only syllables barely discernible were "Guan Yin", which is the Chinese name of Avalokiteshvara Bodhisattva, who is the archetypal personification of the perfect compassionate energy of all Buddhas. Could she be chanting "Namo Daci Dabei Guanshiyin Pusa" (Homage to the One of Great Loving-kindness and Compassion, the Bodhisattva who Regards the Cries of the World)? When asked what she was doing by her colleague, with whom she was waiting for Hunt to accomplish a dangerous part of his mission, she replied that she was praying for his safety.

While we beseech the Bodhisattvas for divine intervention during desperate times, let us remember too, that we can be Bodhisattvas to others and ourselves too - in ways great and little. So what if it seems Mission Impossible at the moment to spiritually liberate all beings? What matters is to do our best in the moment, in each moment. If each and every one of us were to be the best Bodhisattva we can to each other, then surely, this is totally a Mission Possible!