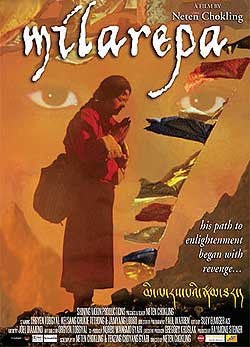 Simply titled Milarepa, the movie was screened at the ongoing Osian's-Cinefan 8th Festival of Asian Cinema in New Delhi. It was the opening film of the festival's special Buddhist cinema section, "The Middle Path: a selection of films on Buddhism." The organisers said the Buddhist section was introduced to celebrate the 2550th anniversary of the birth of Lord Buddha.

Monk Jamyang Lodro plays the role of the young Milarepa. Now in his teens, Lodro won much critical acclaim for his role as the mischievous, kind-hearted, and football-obsessed boy monk in The Cup in 1999.

Milarepa is the latest offering from the producers' of director Khyentse Norbu’s critically acclaimed movie, The Cup in which Ven Chokling was a principal actor.

The film was shot entirely on locations in the Lahaul-Spiti area in north India bordering Tibet. Speaking to reporters after the screening, Ven. Chokling said he and his team had at first thought about shooting it in Tibet but were unable to do so due to the Chinese occupation of Tibet. "I learnt through senior spiritual masters that the place where Milarepa was born resembles the landscapes of Lahaul-Spiti; that's how we decided to shoot there", he said.

The cost of the film is US$ one and a half million which the director said was pooled in from various donations from Europe, USA and Taiwan. It was intially very difficult for him to get financial support as the content of the film, he said, had more of a niche audience appeal unlike the commercial fare which could attract popular attention.

Admitting that he was more of an amateur as he had not attended any filmmaking schools, he said he was fortunate to have an experienced and talented technical support team most of whom are professionals from Australia, USA and France.

Although the film has received some rave reviews, Ven. Chokling says he feels he had not done full justice to the wisdom and spiritual depth of Milarepa's life story.

Before making it to Osian, Milarepa had three screenings at Berlin film festival where it opened to packed halls with many unable to get tickets. It received appreciative reviews from the German press. Another screening was done at the Bangkok film festival. Thailand's princess was among those who attended.

Prominent personalities present at the Milarepa screening in Delhi were Kungoe Tempa Tsering, representative of H.H. the Dalai Lama's Delhi Bureau and the Ambassador of Bhutan among others.

The Osian festival opened on July 14 and will continue till July 23. The festival saw the world premiere of talented filmmaker Pan Nalin's Valley of Flowers which was screened as the opening movie of the festival. Nalin shot to fame with Samsara, a film that revolves around the dilemmatic life of a young Buddhist monk torn between his spiritual obligations and his worldly desires.