The Bittersweetness of "Hard Candy"?

Singapore -- "Hard Candy" is a "koan-ish" movie that seems to blur the line between right and wrong - a modern day fable about moral ambiguity. The story is about a 14-year-old girl (played by Ellen Page), who tricks and punishes a man (played by Patrick Wilson) she suspects to be a pedophile and murderer, who stalks girls in Internet chatrooms. 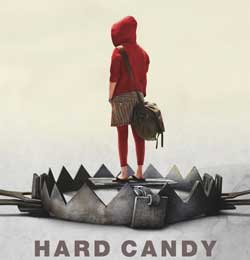 She lures him into bringing her into his own house. After which, in an unexpected reversal of roles, she manages to drug him, tie him up, and castrate him, before finally shaming him into killing himself.

Is there attachment to wanting poetic justice?
Is there aversion from seeing dark justice?

Is one right while the other wrong?
Are none right but both wrong?

Do punishers need to reform?
Is punishment the only way of reforming?

"As I am, so are others; as others are, so am I."
Having thus identified self and others,
harm no one nor have them harmed. ~The Buddha (Sutta Nipata 705)