Los Angeles, CA (USA) -- The Dalai Lama, legendary Buddhist teacher and exiled leader of Tibet, is one of twelve spiritual leaders featured in a new DVD release entitled "On Life & Enlightenment: Principles of Buddhism with His Holiness, The Dalai Lama," now available from Hannover House. This three disc set covers all major aspects of Tibetan culture, philosophy and Buddhism as well as commentary from actor Richard Gere and original music from Indian recording star Rahul Sharma. 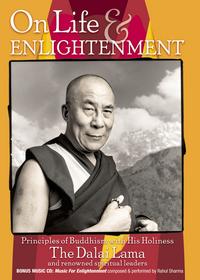 "On Life and Enlightenment" explores Tibetan Vajrayana Buddhism in all its various manifestations. Over the past thousand years, the Tibetans have crystallized the ideas of non-duality and realized the pathways of the mind. They developed techniques and rituals, each of which was designed to bring the adept closer to the spiritual heights held as the ideal. In these troubled times of worldwide political, economic and philosophical struggles, the principles featured on this DVD series appeal to many seeking spiritual enlightenment.

"This film series inspires reflection, beauty and prayer. They lead us deeper into the mysteries and wonders of true spirituality," said Deepak Chopra, best selling author and spiritual leader. "It is rich with color, meaning and truth," he concluded.

"We're honored to be handling the prestigious release of the Dalai Lama's first authorized DVD series," said Eric Parkinson, President of Hannover House. "We are working with many key retailers, catalogs and on-line sellers to make this item as accessible as reasonably possible."