HONG KONG, China -- A Japanese film adaptation of the legendary story of Hiuen Tsang, the 7th century Chinese monk who travelled to India and took back Buddhist sutras, has incensed Chinese netizens who say it subverts their “traditional culture” by sexing up the plotline. 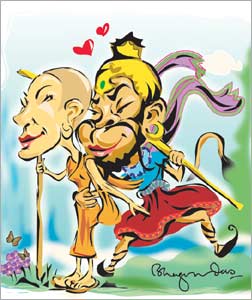 The film is based on Journey to the West, a 16th century Chinese classical novel ascribed to the scholar Wu Chengen, which narrates the legend of the Buddhist monk’s pilgrimage to India during the Tang Dynasty.

According to that legend, Tsang (who is known in China as Xuanzang) travelled to various centres of Buddhist learning in India, including Nalanda, and brought back the sutras, which sowed the seeds for the spread of Buddhism in ancient China. On that journey, Tsang was accompanied by Sun Wukong (or Monkey King), a Hanuman-like character who is capable of extraordinary feats, and two other disciples of Tsang. The four make the perilous journey, overcome several obstacles - much like in the Lord of the Rings — and accomplish their mission.

However, the latest Japanese adaptation has taken several liberties with the plotline. According to reports, Tsang’s role will be played by a woman, and the Monkey King is parodied as a rapacious monkey who wears mini-skirts and even has a romantic liaison with Tsang. The production team has been granted authorisation by the State Administration of Radio, Film and Television (SARFT), which overseas the entertainment industry, and filming is currently under way.

There have been various adaptations of the Monkey King story, including a Japanese tele-series that proved hugely popular in Japan. In China too, a more faithful rendition of the story was made into a TV series in the 1980s, and proved a big hit. Earlier this year, there were rumours that Steven Spielberg was planning a film based on the Monkey King legend.

Although the latest Japanese film version is unlikely to be screened in China, it has infuriated Chinese netizens. In an online poll at a popular website, over 80 per cent said they disapproved of the “distorted” film adaptation. And recently, Zhang Jinlai, the actor who played the Monkey King role in the Chinese tele-series, told the Beijing News that it was important to “prevent malicious spoofing of our traditional cultural, which hurts the feelings of the Chinese people.”

He wondered why Chinese authorities had approved the shooting of the film and the spoofing of a character such as Sun Wukong “who is a heroic character in Chinese belief.”

And Yang Jie, who directed the Chinese tele-series, hyperventilated against the failure of Chinese people to stand up for cultural distortions such as this. Today, he said, people don’t do enough to protect its cultural heritage, “society is fickle, people are dazed by the allure of money, which is why ‘junk’ is being passed off as entertainment,” he ranted.

The Monkey King character is greatly revered in China — but it is also susceptible to commercial exploitation. He figures on Xbox games and is the inspiration for several Japanese anime/manga comic characters. So, it’s not as if the Chinese are particularly sensitive to the distortion of their cultural heritage.

The only difference this time, is that it’s the Japanese who are doing it. And given the history of troubled relations between the two countries, that’s been enough to get a lot of people worked up and demand that the Japanese stop “monkeying around” with Chinese culture.