Dharma-Inspired Movie Review: http://wwws.warnerbros.co.jp/deathnote Singapore -- Like all good fantasy films, the "Death Note" movie series offers powerful real-life lessons on the nature of right versus wrong. Watching the two-parter mindfully can be likened to going through a moral exercise of self-examination. What would you do if you were one of the two conflicting protagonists? Who would you side? Is it the right side? How do you know? 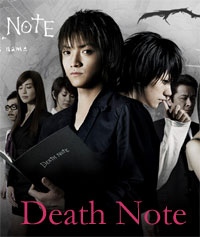 In "Death Note", Light (played by Tatsuya Fujiwara) chances upon an ordinary-looking but supernatural notebook. With quite a few rules to play with, the first says, "The human whose name is written in this note shall die" - almost instantly, of a sudden heart attack (unless otherwise stated). Light, already a brilliant law student, sees this as the perfect means of inflicting the death sentence on criminals at large - those unreached by the supposed long arm of the human court of law. Representing conventional justice is L (played by Ken'ichi Matsuyama), a detective who is somewhat equally brilliant, bent on finding out the true identity of Kira, the codename Light uses. Similarly, Light strives to discover L's true name, so as to "write" him his death sentence.

Light represents those with indignation at unresolved injustice. Disappointed at the loopholes of law, he goes above the law by playing an "angel of death". Idealistic to the extent of being merciless, he decides to create an Utopian world by literally ridding the world of its evil elements - all unrepentant criminals. Ironically, while Kira was praised by many, just as many fret his power, him having become a serial-killer, a terrible faceless criminal at large. Is he a true blessing to society or a curse? What makes Light fascinating is that most of us can identify ourselves with his warped heroic cause to some extent. Have we never entertained some frightening death wish for the atrociously evil? The audience is made to reflect on how the best of intentions can amount to the worst of consequences via misguided actions.

Who represents true justice? Light or L? Who decides? Or do they simply represent two means to the end of ensuring justice? Either way, there are sacrifices to be made. L's faith in the system of law can let slip the guilty, who might harm more of the innocent. Light's self-righteous brand of justice punishes those who get away, but surely, he is liable to make some erroneous personal judgements. Is it alright to sacrifice any in the light of creating law-abiding death-fearing citizens? How just can this be? To Light, the end of terminating evil justifies the means, even if they are evil. But does that not make him the ultimate evil in the name of good? Is he a new god of justice or but a demon of death?

What is adequate punishment for crime? Surely, the death sentence is always too harsh? It is not even a warning to the guilty, as it offers no second chance in this lifetime. Reformation is the humane alternative, that exemplifies trust in the Buddha-nature of all. It is all too easy to obliterate what we feel disgust at. But to achieve a truly Utopian society, there must be compassion - even for the worst of its citizens gone astray. Killing the guilty does not eradicate the elements within society which are the real perpetrators of evil - the three poisons of greed, hatred and delusion. The evil killed can also be reborn into our world again. What we need to eliminate are the poisons within ourselves; not those poisoned by them - who can be cured. The real enemy is enmity within, not enemies without. Enmity itself is a poison, a manifestation of hatred.

What do we do when we lose faith in imperfect human laws after doing one's best to gather proof that the guilty are indeed so? We can either trust that the flawless law of karma has much longer arms than human law, or lose heart in justice, or breach human law to uphold justice. Which do you choose?

"Death Note" is last of all, a sombre reminder of our mortality. Our time is limited in this life. What will you use your life for? Is your cause worth it? By the end of the second movie, both Light and L died - in a final showdown to outwit each other using the Death Note. The last name in "Death's book" we see is always ours - lest we are reborn again. Meanwhile, what are you penning in the remaining pages... of your book of life?
TOP