Brisbane, Australia -- This is my favourite type of movie, in which visuals and sound are used to create a sensual world that envelops you, making your immediate surrounds seem distant. 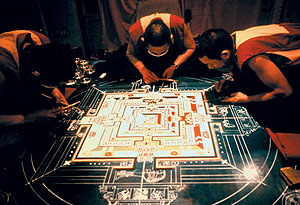 Director Werner Herzog travelled to India's Bodh Gaya in 2003 for the Kalachakra, a Buddhist ceremony attended by 500,000 pilgrims. Usually, the Dalai Lama makes the opening strokes on the mandala and initiates the monks. This year he was delayed due to illness. Herzog, who has won many awards for his previous films, set about documenting the daily lives of the faithful; some of whom had trekked thousands of kilometres in prostrations (a quasi crawl) to be there.

The scene is one of intense beauty and activity; as monks spend 18 hours a day layering coloured sand onto the intricate mandala, outside thousands of red-robed attendees perform prostrations and meditations, debate Buddhist topics and prepare food and tea in enormous vats.

Herzog mostly just observes, letting the stunning visuals do the talking. Occasionally he asks questions of the participants, like the monk who buys four tiny birds from a cage, encloses them in his palms, then sets them free. Why does he do that, Herzog wants to know? For other answers, he goes to the big cheese - the Dalai Lama, who finally arrives but is too ill to perform the initiation.

Herzog shows a genuine curiosity for his subject but this is not a self-indulgent film. It is simple, affecting and a sensory delight.