"Spider-man 3" Versus the Poisons 3

Singapore -- Stan Lee, the creator of Spider-man (played by Tobey Maguire) makes a cameo appearance in "Spider-Man 3", in which he remarks to Peter Parker (Spidey's "real" identity), on Spider-man's efforts of making the world a better place - "I guess one person can make a difference." 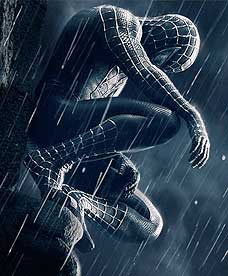 Indeed. All the significant good that ever occurred in the world were initiated by individuals - who inspired even more individuals. We might not have super powers, but where we have ability to help, we are already have the necessary powers. Lee, as an individual himself, made huge differences to the world through his creation of Spider-man in 1962. Though fictitious, Spider-man continues to bring home messages of righteousness and many other important issues through popular media.

Spider-man has become an urban "myth" of our times. Just as ancient mythological figures continue to inspire modern man, we can easily imagine folks in the future reliving lessons from Spider-man comics. Just as larger-than-life mythological figures accentuate morals to us in an entertaining manner, Spider-man, with his superpowers does this superbly. With the drama of life, his adventures are sometimes tragedies, sometimes comedies. Sometimes, characters don't have to be real to teach us real lessons.

One of the most unglamorous yet most realistic of superheroes, Spider-man in "real life" is neither rich nor popular. He gets bullied at school and struggles with his job. This makes him even more remarkable - for those who are heroic though they are not obliged to be are truly heroes. Already dealing with the "demands of Samsara" in his real life, his alter-ego voluntarily takes up the extra burden of doing his best to help the helpless. Though with adulating fans whenever saving the day, it's a largely thankless job when he takes off his mask. This is classic superhero altruism - selfless "Bodhisattva" style! By the way, he keeps his mask on not so much for an ego trip or self-protection, but to protect his loved ones from dangerous enemies.

Some lines from the movie teaser - "How long can any man fight the darkness before he finds it in himself? The greatest battle lies within." These lines remind me of Nietzsche's famous quote - "He who fights with monsters might take care lest he thereby becomes a monster. And if you gaze for long into an abyss, the abyss gazes also into you." This quote from the Buddha also comes to mind - "Though thousand times a thousand in battle one may conquer, yet should one conquer just oneself, one is the greatest conqueror." In "Spider-man 3", the friendly neighbourhood superhero faces three supervillains - Green Goblin, Sandman and Venom, yet none are as formidable as his inner super demons - his three personal poisons of greed, hatred and delusion.

An alien symbiote attempts to fuse with Spider-man via his suit, forcefully "possessing" him. Black and slimy with malicious shape-shifting nature, the symbiote seems to be the perfect embodiment of the three spiritual poisons. Once these venomous parasites bind, unbinding is a challenge. The symbiote enhances Spider-man's aggression, making him prefer a darker shade of vengeful justice. Inevitably, dark justice becomes injustice. Facilitating justice and exacting vengeance involves two very different states of mind! It is part of the universal code of conduct that superheroes abstain from killing their enemies - this is likened to the first precept of abstaining from taking lives - even that of the opposition. All who can be spared should be spared. With loss of life, the chance to repent and reform is also lost.

Infected with the symbiote, Spider-man faces the doubly tough trial of overcoming "himself" while fighting external foes. Blinded by ego, he even became blind to those who love him. Thankfully, like all defilements, which are not innately of our true nature, our demons can be exorcised like all poisons should be purged. We need to constantly purge ourselves of evil, even as we attempt to purge the world of evil. Otherwise, we might be further poisoning the already poisoned with more evil. Successfully ridding the symbiote from himself, it infects Eddie Brock (played by Topher Grace) instead. Already boiling with rage at a grudge with Peter, he becomes a perfect host for the symbiote's purpose. Bound together, they transform to be his super-strong enemy - Venom.

Realising his mistake of having provoked Eddie, Spider-man had to lower his pride to seek help from Harry Osborn (played by James Franco) to rescue Mary Jane (played by Kirsten Dunst), who was held hostage by Venom and Sandman (played by Thomas Haden Church). Yes, "Everybody needs help. Even Spider-Man." Even Bodhisattvas help each other when needed. Harry had assumed the role of the Green Goblin to kill Spider-man. With the theme of forgiveness in the background, Harry realises he had mistaken him for killing his father, while Spider-man realises his mistake of almost killing Harry in a fit of anger. As Mary Jane uttered, "We've all done terrible things to each other, but we have to forgive each other. Or everything we ever were will mean nothing." Without forgiveness, we will only destroy each other. As the Buddha taught, "Hatred cannot be ceased by hatred; hatred can only be ceased by love."

Spider-man also forgives Sandman, whom he discovered to be the real killer of his beloved Uncle Ben. Seeing himself as a victim of circumstances, who "had" to rob to help his sick daughter, Sandman believed he isn't truly a "bad person"; just someone with "bad luck". He felt choicelessly compelled to be a petty criminal. We need to believe there are better choices. If all are to give in to criminal urges for our purposes, what would the world become?

We create our own "luck", or rather, karma - with the choices we make. Criminals are not forced to be criminals, while criminals force their victims to be victims. Even in desperate times, we need the courage and will to seek kinder and wiser means to make ends meet. As Peter remarks at the end of the film, we always have choices, and we can always choose to do what is right. Yes. If not, life would not be worth living for.