Mumbai, India -- Jyothirmayi is doing a fairly good job at balancing between Tamil and Malayalam films and is experimenting with all kinds of roles. 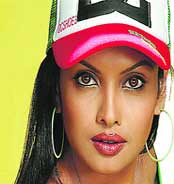 In her forthcoming Malayalam film titled Bodhi, she plays the role of a Buddhist holy woman named Maatangi.

Based on Pandaalabhi-kshuki, a book by Kumaran Ashaan, the film is to be directed by theatre director G Ajayan.

It is now to be seen how a glamourous actor like Jyothirmayi will look in a deglamoutrised role.