The Odds of Getting Even with "Ocean's 13"

Singapore -- The taglines for the film "Ocean's 13" go like this - "Revenge is a funny thing... What are the odds of getting even? 13 to one." Vengeance is a funny thing - in fact, it's a senseless thing - because it can go on and on, to and fro - endlessly. From "Ocean's 11" to "12", and now to "13", ongoing vengeance is a common theme in the trilogy. And if "13" sells well, is "14" inevitable? It means the audience gets a huge kick from seeing vengeance on the big screen and wants more big-time mutual payback in action! 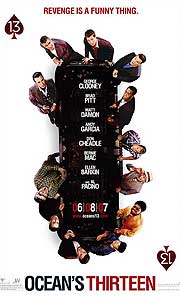 Thoughts of vengeance render one in uncomfortable tension immediately - instant karma of mental Dukkha (existential anguish)! There is no way to guarantee that the one(s) you wreck vengeance upon will not get back at you. Even if your "enemies" die, they can return in a future life in other forms, nursing similar hate. Karma rebounds. Thus did the Buddha teach this - "Victory breeds enmity. The defeated one sleeps badly. The peaceful one sleeps at ease, having abandoned victory and defeat." Vengeance ends with the dissolving of enmity - it does not end with you delivering a final blow, with which you wishfully thinking your enemy will lie down once and for all, non-retaliating, content with defeat.

So, does it mean that we should not do anything to set things right? Should we suffer fools gladly? Would that not make us fools in return? We should simply do the best we can to rectify the situation and voice the unfairness - without animosity. But learn to let go of attachment for wanting others' repentance and punishment. Learn to let go of the aversion to their misdeeds towards us too. Not doing so, we punish ourselves indefinitely with burning thoughts of hatred. That makes us fools. Sure, (Danny) Ocean's (played by George Clooney) gang of 13 make vengeance relatively suave and cool - but there are much undercurrent emotional disturbances too. If not, there would be no elaborate schemes of vengeance in the first place. And this is cinema - vengeance in real life can be gritty, violently uncool.

In this third instalment, what triggered the "need" for vengeance was Ocean's mentor's (played by Elliot Gould) heart attack - in turn triggered by the unscrupulous Bank's (played by Al Pacino) schemes to swallow his property. Yes - being heated up can harm both your body and mind. You can literally die from from losing your cool! Not to be a killjoy to those who enjoy seeing "poetic justice", "Ocean's 13" is cool - but with 13 folks this time, it could be even more cool, more poetic. What's really suave and cool is to let go of vengeance - while still doing what you can to legitimately right wrongs. Crime is not cool because you get away with it. Because it fattens the pride, which is perfect for inspiring more "cool" plans - which can eventually land one in an uncool place - incarcerated.

The best way of getting even? Let me reiterate. Step one - Forgive - as immediately as you can - not with a vengeance of course, as some see forgiveness as the best "revenge"! Step two - Do the appropriate to seek justice, with a mind that already forgave - not just for your sake, but for the other person's too - lest he or she gloats over victory and does more wrong to others. Step three - Forgive and forget? The real victor forgives what should be forgiven but never forgets the lessons learnt. That's how a spiritual victory is made out of every situation, even the worst defeat.