The Missing Mystery of "Nancy Drew"

Singapore -- Nancy Drew, the perpetual teenage detective "born" in the 1930s is back in action - out of the pages of her famous mystery book series - and up onto the silver screen. 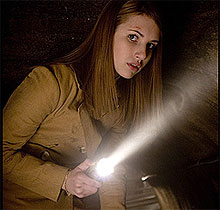 Written by a team of ghostwriters under the single pseudonym of "Carolyn Keene", exactly who wrote which book is itself a mystery to many unknowing readers! Played by Emma Roberts, Nancy is still the irrepressibly inquisitive detective who can't help sleuthing. In a sense, surely, Nancy Drew writers and fans can't help playing detective too - through Nancy. The whole phenomenon perhaps represents the collective curiosity of many.

Nancy is urged by her father to give up sleuthing, to enjoy being a "normal teenager". But of course, she's no normal teenager in the first place; but not abnormal though - just different in uncoventionally good ways. True to the nature of her origins, she is depicted with old-fashioned apparel. As we know about the rebirth cycles of fashion, the retro returns. At some point, her dressing "becomes" hip and trendy! Seen by schoolmates as dorky at first, she proves her sincerity and intelligence to them, winning their respect. So genuinely good-natured was her that at no point did she bear the slightest grudge against anyone. As all great Bodhisattvas do, even one's greatest so-called "enemy" is seen as a challenge to respond with greater compassion and wisdom.

Nancy is a volunteer proactive Bodhisattva of sorts, as she altruistically helps to solve crimes, without being asked or paid, while often risking her life. Just as good Bodhisattvas use various skilful means for the ends of assisting others, she constantly improvises, using her smarts - beyond the detailed but limited detective kit she "traditionally" carries around. So smart is she that she doesn't need to resort to guns and violence to solve crimes. Ever forgiving, she's not interested in arresting or incarcerating criminals. She is more interested in counselling them, advising them to repent their ways. The makings of a true heroine! Sadhu! Given that all crimes are motivated by greed, hatred and delusion, punishment as a deterrence to future crimes is no match for reforming criminals. Being the "role model" that she must subconsciously be to many, it's no wonder youngsters of more than one generation enjoy reading her adventures.

After solving yet another mystery near the end of the film, it was remarked that Nancy is only satisfied when there is "trouble" - whereupon she can enjoy springing into action to investigate. If not, there is just "no satisfaction". Now that's a reverse and positive outlook on facing Dukkha (dissatisfactions of life)? There is the danger of being attached to Dukkha though. An analysis on the insatiable Nancy Drew... What she probably craves for is one ultimate mystery to solve - one ultimate adventure. All the mysteries she solved so far are worldly ones.

Don't get me wrong - her efforts are totally praiseworthy. However, she must have been continually missing an immediate mystery. A koan (or mondo) in fact, the first and final mystery - "Who is Nancy Drew?" Deceptively simple yet profound question. Phrased for you, "Who am I?" Yes - you! It's a personal spiritual mystery that requires her shift of attention and curiosity. Solving this leads to enlightenment! Thus attaining great wisdom, she would be even more effective in solving other mysteries!