Bodhisattvic "Transformers" of Wrath to Peace

Singapore -- As all worthy science-fiction films are, "Transformers" is not merely some flick about "robots in disguise". Indeed, there is "more than meets the eye". Any movie is good only when it teaches lessons on humanity, to humanity. "Transformers" is a technically elaborate exercise for telling a story on human-nature through machines. Come to think of it, all humans can come up with are such stories - as based on their own understanding of human-nature! 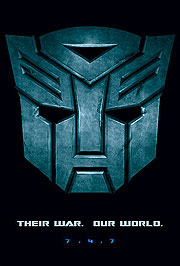 As the tagline goes, "Their war. Our world." Two technologically advanced robotic yet sentient factions of planet Cybertron arrive on Earth to fight for possession of the Allspark, which is a power source of immense creative and destructive energy. A case of the clash of metallic titans. The "demonic" ones are the Decepticons while the good "Bodhisattva-like" guys are the Autobots. Optimus Prime even utters his famous one-liner in the film - "Freedom is the right of all sentient beings." Hey, something like that might as well be said by the Buddha!

The clash stems from ideology. The first believes in the acquisition of power for domination of the universe while the latter believes in defending peaceful co-existence. Autobot leader Optimus Prime is, discounting Buddhas of course, the strongest benevolent force in the universe, while Decepticon leader Megatron is ruthless and bent on accumulating ultimate power, arguably the most dangerous opposing force... not unlike Mara perhaps, as the external agent of great evil, or as the collective dark "force" of our inner demons. But mind you, the Autobots can manifest as "wrathful Bodhisattvas" to subdue "wrathful demons" too.

More on "robots in disguise", these Transformers can morph to take the shape of any electronic device or machine - from as small as a mobile phone to a huge jet fighter. While the Autobots disguise to better help, the Decepticions do it for, yes, deception, with purely ill intents. Same action, different karma! Thus does the quality of karma created hinges upon one's motivations; not the deed itself. Don't be fooled by a police car for instance. It might have no driver intent to help - it might be a Decepticon. A clichéd but nevertheless valid lesson on the importance of not judging by appearances. A vehicle of the law supposedly to serve and to protect in this case is driven by lawlessness! Mara takes many guises indeed. A Decepticon spy disguises as a stereo set for instance. Let slip a little mindfulness and small evils seep through the gap.

Technology is inherent empty of any fixed characteristics. It can be used for offence, defence or something else. An "empty" thing is only steered towards good or evil by the minds who use it. As in the case of the Transformers and humans, technology is no guarantee of greater peace or wisdom, for only spiritual purification can ensure that. On Earth's technological and spiritual immaturity, Prime considers humans primitive, violent, young and with lots to learn. Though fictional, what he says is nevertheless true, for as long we fight among ourselves for selfish causes, we are far from being an enlightened species.

There is a scene where the megalomaniacal Megatron thaws from being frozen for years. A case of the reawakening of the wrath of a mega "Mara". Perhaps we should reflect on whether our personal Maras are truly subdued once and for all, or merely put in suspended animation due to "conducive" present conditions. The challenge is to transform our Maras to Bodhisattvas before they "thaw" and become reanimated! As Prime remarks, there is no victory without sacrifice. Indeed, the ultimate sacrifice for the ultimate victory of winning enlightenment is to let go of our illusion of self, thereby exorcising all inner Maras.

The dialogue between Optimus Prime and Megatron during their final showdown shares interesting ideas on the nature of sacrifice. Prime refuses to let humans sacrifice in vain - to the extent that he is willing to sacrifice his life for their survival. Great unconditional altruistic Bodhisattva motivation! Megatron however, believes that Prime will lose because he fights for the weak, who don't deserve to live, while Prime rebutts that they deserve to choose. Megatron should perhaps imagine himself possibly weak one day, and whether he would appreciate compassion then. As he utters sarcastically, "Is it fear or courage that compels you?" Both perhaps, but the point is to not let fear compel us to relinquish courage for doing the right thing.

The above is reminiscent of the story of the young yet compassionate Prince Siddhartha (the Buddha-to-be) defending a swan shot by Devadatta. While Devadatta wanted its life, wise advisors decide that a life belongs to one who seeks to protect it; not destroy it. The Earth-stranded Autobots thereby become volunteer guardians of humanity, protectors of those whom they dwell with. They are "supposedly" among us - as vehicles and such... "Bodhisattvas" in disguise!