Los Angeles, USA -- How do you make a film about ancient Tibetan history and legend, while keeping it relevant to a modern audience? It helps if, as is the case with Milarepa: Magician, Murderer, Saint, your director is a Tibetan Buddhist lama, and you have over 50 Tibetan monks in your cast and crew -- and a story full of human drama that centers around a fascinating character. 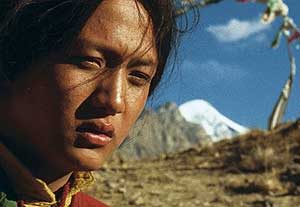 The film tells the story of Milarepa, an 11th century yogi and poet who rose from a tragic youth and a period spent studying black arts so that he could exact murderous revenge, who went on to achieve "enlightenment" and become one of the most famous of the Tibetan Saints.

The film's storyline sticks pretty close to Tibetan Buddhist legend: Milarepa, born as Thopaga (played by various actors as he ages, and by monk Jamyang Lodro as an adult) to a wealthy merchant family, enjoys a pampered existence in his youth, until his father suddenly falls ill and dies, leaving his estate in trust with his brother to hold for Thopaga until the young boy comes of age to marry his cousin, to whom he is betrothed.

The uncle, a greedy and deceitful man, steals Thopaga's estate and forces the boy, his mother and his younger sister to live in poverty, surviving off scraps. Thopaga's mother, Kargyen (Kelsang Chukie Tethong, who also provides some of the vocals for the soundtrack) is bitter and angry at the unfairness of her brother-in-law's actions, but is powerless to change things.

When Thopaga comes of age, his mother throws a small party and invites his uncle and aunt and all the villagers, so that she can ask the uncle publicly to return her son's estate now that he is of age to marry his cousin, Zesay. Kargyen thinks that, if she asks in a public setting, the villagers will back up her claim, and her brother-in-law will have no choice but to return to his nephew that which is rightfully his. The uncle refuses, though, claiming there was never an estate, and Thopaga and his family are left destitute with no hope any longer that their situation will ever improve. None of the villagers will go against the uncle, who is now wealthy and powerful because of his treachery.

Seeking revenge, Thopaga's mother urges him to seek out a famous sorceror and study the black arts under him, to acquire the knowledge needed to come back and exact revenge upon the uncle and all the villagers. Young Thopaga, feeling helpless and angry, and not knowing what else to do, follows his mother's advice and seeks out the sorceror, Yongten Trogyal. On his journey he is helped and befriended by the sorceror's son, who takes Thopaga home to his father's fortress high on a mountaintop.

After confirming Thopaga's tale, the sorceror agrees to take him under his wing and teach him the dark arts. Thopaga returns to his village once he's completed his training, brings down the thunder and the lightning (and a few boulders, to boot) upon his uncle and the villagers ... and finds that revenge doesn't taste quite as sweet as he thought it would. He cannot get the faces of the innocent dead out of his head; their voices speak to him.

The film ends shortly thereafter, with Thopaga hiding in a Buddhist monastery. He tells the old monk in the monastery that his enemies are everywhere, and the monk responds with a Buddhist teaching:

"Enemies from your own mind;
To conquer them,
Cease negative actions,
Cultivate positive ones,
And tame your mind."

This teaching helps Thopaga to see that the path he's gone down will never bring him happiness ... the rest of the story, a footnote tells us, will come in a second film about Milarepa in 2009, so we'll just have to wait to see the director's vision of Milarepa's journey to enlightenment. If it's anything like the first part of the story, though, it will certainly be stunningly beautiful -- Milarepa was filmed on location in the Indian Himalayas, in the Spiti Valley on the Indo-Tibetan border, and while shooting there must have brought with it some technical difficulties, it makes the film look and feel as close to 11th century Tibet as you're likely to get in this day and age. The hauntingly beautiful musical score enhances the film as well.

The lush costumes and props used throughout the film were borrowed from Tibetan communities in northern India, and much of the cast are actually Tibetan monks The director, H.E. Neten Chokling Rinpoche, is recognized as the fourth incarnation of the Tibetan yogi, Chokgyur Lingpa, and received his formal Buddhist training at his ancestral monastery, Pema Ewam Chogar Gyurme Ling Monastery in Bir, India. The monastery also provided the monks that make up most of the cast and crew, including the film's star, Jamyang Lodro, and most of the props and costumes are authentic, borrowed from Tibetan communities in northern India. The film, being the vision of a lama raised since toddlerhood in Buddhist tradition, steeped in Tibetan history, and surrounded with authentic Tibetan trappings, feels like what it is -- a film about a legendary yogi and saint made by people who truly understand the story and history they're trying to convey.

Because the film is set in 11th century Tibet, there are elements of magic and sorcery woven into the storyline; ancient Tibetan history is filled with tales of yogis who could fly through the air and perform other strange feats; belief in sorcery was accepted and commonplace. The special effects in the film are not over-top, but they convey the air of magic and mystery quite adequately. Tibetan lore even seeped into the production process, as divination was used to determine production decisions, and sacred rituals performed to remove obstacles and negativity after the cameras broke down in the second week of production..

The production notes indicate that Neten Chokling, who has two monasteries and an orphanage to fund, hopes to see Milarepa succeed and bring in revenue needed to support those causes. It's an interersting concept and blending of the ancient with the modern -- a Tibetan lama with an interest in cinema making movies about ancient Tibetan history for a modern audience, in the hopes of both raising interest in Buddhism and supporting the compassionate causes of his monasteries.

At any rate, whether through spiritual means or secular, the end result is a nicely done niche film that tells the first part of the story of one of the most fascinating figures in ancient Tibetan lore. It will certainly be of interest in Buddhist circles, and among those interested in films exploring issues of spirituality; whether it will have a broader appeal to a Western audience, remains to be seen. Milarepa opens in NYC on September 7, and in Los Angeles September 14; the official website has a complete listing of upcoming screenings (http://milarepamovie.com/drupal-5.1/)