"The Bourne Ultimatum" of Anatta

Singapore -- First, there was "The Bourne Identity", followed by its sequel "The Bourne Supremacy". The latest (and last?) in the action thriller trilogy is "The Bourne Ultimatum". With the anti-hero protagonist Jason Bourne (played by Matt Damon) being an amnesiac ex-government assassin, the Bourne series is essentially a quest for identity and freedom. While these two qualities seem congruent, they are more contradictory than usually imagined. Spiritually, true freedom is realised by letting go of attachment to self-identity. 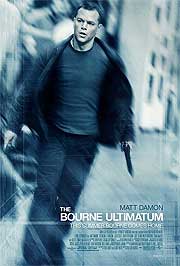 Throughout the series, Bourne endeavours to rediscover his forgotten "past life", dark as it might be. The harder he struggles, the more resistance is there from his former employers, who think his past persona as a highly trained killer is so dangerous that he ought to be silenced for "good". Though Bourne had amnesia, both sides were driven to hunt each other due to strong attachment to his former identity. Thus, what essentially dangerous was attachment, more than each other.

The more Bourne asserted his will to uncover his past, the more his enemies asserted their will to bury him with it. Ironically, Bourne had assumed many identities in the series to escape his foes, but he nevertheless clings to the elusive Bourne identity.

In a way, that was the source of his suffering. When you let go of your past, your past ceases to haunt you... unless there are inevitable karmic repercussions which catch up. He did try to dissolve his past identity though, by fading into the background... but to no avail. Those who pursued him were also suffering from the negative karmic rebound of having created a skilled killer that "cannot" be killed.

The tagline of "Ultimatum" is "Remember everything. Forgive nothing." A determined and merciless statement indeed. The twist in the tale is that Bourne eventually recalls how he volunteered for the secret program which shaped him into a stealthy and deadly assassin. Does this means he should not pardon himself? He had been his primal and greatest enemy all the while. Assuming his enemies were out there, his delusion was his true enemy. As the Buddha taught, "To conquer oneself is greater than to conquer thousands in battle."

Just as we give others chances to repent and reform, Bourne should give himself a break. He is no longer the cold-blooded killer he was made to be. He had changed - "reborn" so to speak. This is the truth of Anicca (constant change of mind and matter). He had already realised the evil of killing; though those who pursue him have not. However, ironically, to investigate his past, he "unwittingly" harms and even kills - out of self-defence. On the senselessness of killing on order without question, he exclaims to an agent sent to kill him - "You don't even know what you are supposed to kill me for." Likewise, he did not truly know what he was killing for.

The way to conquer oneself is to realise the illusion of an enduring self-entity. One then sets one"self" free of all suffering. The spiritual "Bourne Ultimatum" which leads to freedom is the conquest of ego by the realisation of Anatta (non-self). If Bourne was more mindful, he would have realised that physically and mentally, he had been "shape-shifting" all this while - to the extent that there is ultimately no concrete person named (or codenamed) "Jason Bourne" to hang on to. But of course, even if he realised this, those after him would need to realise it too. Otherwise, driven by fear, they would still be unrelenting in their efforts to eliminate him.

After seemingly endless chase scenes, the final scene shows Bourne jumping into a river to evade his enemies. He survives (of course. Will he have a new lease of life? Has he finally purged himself of his personal demons - both outer and inner ones? Of the meanderings and complications of the cause and effect of intertwining karma and will, only time and the scriptwriters will tell. Back to the present tense, as a Buddhist teaching goes, there is no need to overly dwell on the past or imagine the future. It is by living well in this moment, which creates pleasant yesterdays and tomorrows. "Now" is all we have - even though it too continually slips away - like the cunning Bourne always does!