Singapore -- In the tradition of creative animation of thinking and talking animals, the film "Ratatouille" offers the latest detailed anthropomorphism of non-human sentient beings - rats in this case. 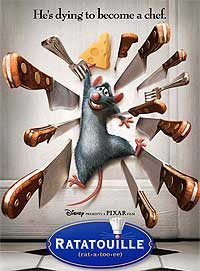 For the uninitiated, anthropomorphism refers to the ascribing of human characteristics to the non-human. To some extent, the "humanisation" of animals helps to stir up compassion for the animals in real life.

After all, all sentient beings wish to have happiness, to be free from suffering. The scurrying of rats in the film might be for humourous effects, but the fear of death that rats have is not very different from ours, if not more.

As the Buddha reminds us in the Metta Sutta (Discourse on Loving-kindness), on the radiation of equanimous loving-kindness (metta) to all beings - "Whatever living beings there may be - feeble or strong, long, stout, or of medium size, short, small, large, those seen or those unseen, those dwelling far or near, those who are born as well as those yet to be born - may all beings have happy minds... Just as a mother would protect her only child with her life even so let one cultivate a boundless love towards all beings." (From http://www.accesstoinsight.org/tipitaka/kn/snp/snp.1.08.piya.html)

An interesting observation is that other animals playing a "lesser" role in such films are often portrayed as less intelligent and worthy, unable to speak . Isn't this bad faith for the equal rights of animals? However, in "Ratatouille", the only animals focused upon are rats, though there was a brief scene of a couple of rats tenderising a slab of meat by punching it. Would that scene make sense in a setting where the humans eat "exotic" meats such as that of rats? Credit should be given though, to other films with more balanced anthropomorphism, including "A Shark's Tale", where carnivorous sharks are portrayed to be vegetarian out of compassion! And yes, "Ratatouille" happens to be a vegetarian delicacy!

Dreaming of creating and savouring delicious food, the star of the show is Remy (voiced by Patton Oswalt) - a rat from the countryside. He accidentally stumbles into the heart of Paris, where he meets a desperate young man (Linguini, voiced by Lou Ramano) working in a restaurant. They form an unlikely partnership where Remy hides under his toque blanche (chef's hat) to "puppet" him to cook well-received dishes. Like many humans, Remy was torn between family and "career", as his father warns him of the perils of hanging out with humans, who tend to demonise rats as nothing more than pests. Food for thought - what constitutes a "pest"? Isn't it relative? Surely, to rats, humans are pesky! Why not have metta for all beings then?

Lost initially in the sewers, Remy realised that "If you focus on what you left behind, you will never see what lies ahead." Good advice - live in the moment - from moment to moment; not moment with moment. All we have is now, while the past (and future) cannot be grasped at, much as we might wish to at times. When he finds his family later, he has a discussion with his father on the nature of things. His father is adamant that there is no way they can change their nature as rats, while Remy retorts that "nature is change". Indeed - for that is how we can better ourselves - by changing ourselves.

Perhaps, the worst way of being ostracised is personal - us alienating and belittling ourselves.

The fine food connoisseur that Remy is also means he is a picky eater. His garbage-eating brother remarks that the key of enjoying food is to not be picky, but he disagrees. Remy says that "If you are what you eat, then I only want to eat the good stuff." In other words, he doesn't want "junk food" (literally). Hs father disagrees with Remy too - "Food is fuel. You get picky about what you put in the tank, your engine is gonna die." The Middle Path then, is to not be too picky in terms of craving for taste, but to eat with mindfulness of nutrition! Towards the end of the movie, Remy serves up humble peasant fare - Ratatouille. A simple vegetable stew it may be, perhaps not even sounding sumptuous, but he uses it to save the restaurant when he impresses a food critic pickier than himself.

The usually harsh critic Anton Ego (voiced by Peter O'Toole) offers perhaps the final "Dharma" lesson in the show - "In the past, I have made no secret of my disdain for Chef Gusteau's [Linguini's deceased father] famous motto: Anyone can cook. But I realise that only now do I truly understand what he meant. Not everyone can become a great artist [at least, not immediately], but a great artist can come from anywhere. It is difficult to imagine more humble origins than those of the genius now cooking at Gusteau's, who is, in this critic's opinion, nothing less than the finest chef in France." Brimming with humble gratitude, perhaps it is true what they say - that the way to a man's heart is through his stomach. Of course, it is not the only way, but it seems like "anything", including food, can be used as a skilful means to touch someone positively! Hey, even a cartoon rat can inspire you!