Singapore -- The story of "Evan Almighty" is not as mightily insightful as its prequel "Bruce Almighty" was. Evan Baxter (played by Steve Carell) did not have the literal "might and magic" which his predecessor Bruce Nolan (played by Jim Carrey) had. 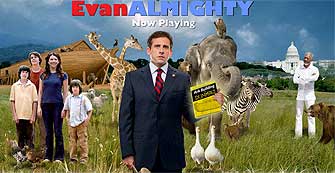 Instead of focusing on personal might (which "Bruce Almighty" did), "Evan Almighty" touches more on godly might. However, beyond being a light-hearted comedy co-starring "God" (played by Morgan Freeman), it also raises interesting existential questions about the nature of "God". Please note that the following reflections are about "God" as a concept; not as a religious figure. These are not Buddhist lamentations about "God", since Buddhism does not believe that such a being exists.

Evan was reluctantly cornered and forced by "God" (who calls himself "G" in the film) to build an ark, for reasons he was initially unaware of, while disrupting his family and work life. (Where's the free will?) A case of G working in "mysterious" ways? However, the end of the story begs the question of why G did not tell Evan the purpose of building the ark in the first place. In fact, it could have better motivated him.

If G created Evan, why must his learning curve be so steep? Similarly, if G exists, why does he not clearly manifest to tell us his "plans" personally, instead of demanding faith? And if, as said, G does everything out of love, how is his sustenance of an unforgiving eternal afterlife for the "guilty" ever loving? In Buddhism, there is no eternal "punishment" for the limited ill that might be done in a lifetime. There are always chances for rebirth and repentance.

On urging Evan, if G is almighty, why did he create a weaker being, thus having to compel him to follow his will? Should not the almighty create only the almighty? Could G not simply create the ark personally? Buddhism does not centre around belief in the existence of a creator God, though it mentions a god who mistaken himself to have created the world. Instead, involving the cause and effect of karma and nature, we individually and collectively (re)create the world with our thoughts, words and deeds. A tagline of the film accidentally attests to this - "God has a grand design. Guess who has to build it?" It is us who are the creators. And G's overall design should be so grand and great that there should be no need for an ark to save the day.

The ark turned out to be for saving animals and humans from a flood caused by the breaching of an ill-managed dam. So it seems, the disaster was man-made, not G-made. But surely, if everything can be G-controlled, why not simply prevent the disaster? To teach a lesson perhaps? But why not create all with perfect wisdom in the first place - unless there is no perfectly wise creator of all? And what about natural floods which swept countless lives away in history and continue to do so? Are they due to "an act of G" or the inaction of G? If there is an almighty and kindly G, how can this happen? The Buddhist explanation does not involve any G, but the workings of karma and nature.

As Dr V.A. Gunasekara shared in a statement on "The Buddhist Attitude to God" (http://www.buddhistinformation.com/buddhist_attitude_to_god.htm) - 'In the West a number of "arguments" have been adduced to prove or disprove the existence of God. Some of these were anticipated by the Buddha. One of the most popular is the "first cause" argument according to which everything must have a cause, and God is considered the first cause of the Universe. The Buddhist theory of causation says that every thing must have preconditions for its existence, and this law must also extend to "God" should such an entity exist. But while the "first cause" claims that God creates everything, it exempts God from the ambit of this law. However if exemptions are made with respect to God such exemptions could be made with respect to other things also hereby contradicting the principle of the first cause.

But the argument which the Buddha most frequently uses is what is now called the "argument from evil" which in the Buddhist sense could be stated as the argument from dukkha (suffering or un-satisfactoriness). This states that the empirical fact of the existence of dukkha cannot be reconciled with the existence of an omnipotent and omniscient being who is also all good. The following verses from the Bhûridatta Jataka bring this out clearly:

G explained that the "story" of the previous great flood was actually about love instead of wrath, about couples (animal and human) walking side by side in unity. This might be so for the handful of saved ones. What about the millions of other animals and humans who perished? Is that also about love? Evan remarked that there is not supposed to be any more wrathful floods - yet natural disasters are still abound, affecting even those faithful of G. Evan realises that with his rise in politics, "With great power comes great responsibility." (Yes, he quoted from Spider-man.) If so, is it not true that "With all the power comes all the responsibilities?" Is the state of the world and his creations not G's great burden to bear alone?

Evan, despite being rather egocentric and selfish, was chosen by G to build the ark. In the process, he betters himself. If so, it would have been much kinder for G to ask all humans to build the ark together. Surely, just as G could get Evan to do it, the almighty could gather all to do so? For the betterment of all, why not? G tells Evan, "You want to change the world. So do I." And he encourages him to change the world at one random act of kindness at a time. But if G is almighty, why not simply change the world with one huge non-random act of kindness, by eliminating all suffering once and for all? The Buddha taught that suffering is self-created and self-ceased though. G tells Evan that he cannot instantly grant virtues such as patience and courage to those who pray for them. All he can do is create opportunities for nurturing them. Yet the world as it is, already karmically offers many opportunities, if only we are mindful.

The featuring of many intelligent animals in the film is interesting, surely stirring up second thoughts on "G's creatures" being seen by some as "mindless", merely for human domination and exploitation. From birds to monkeys, sheep to elephants, and many others, all the animals were portrayed to crave for survival - not unlike us. Here's "food" for thought - why save only a couple of each animals via the ark? Why not save as many as you can now? It can be as easy as refraining from continual consumption of them. For believers of G, why should his wonderful animal creations be bred, imprisoned, tortured, slaughtered and devoured by the millions daily? Is this not disrespectful - first to these sentient beings, and second to G? As Carell said in an interview, "I enjoyed [working with] the elephants and giraffes; they were incredibly sweet. When you look at a giraffe up close, you will notice that it has very soulful eyes and a kind face." Why not connect to all other animals too?

Featuring an impending flood, perhaps the biggest letdown of the film is its failure to use the golden opportunity to delve deeper into environmental issues. Just as Evan was a politician, was "an inconvenient truth" (of global warming) conservatively skipped for politically-correct reasons? With flash floods (yes, floods!), heat waves and other weather anomalies going on globally, it is surely bad faith to give something so obvious a miss, to instead touch only a wee bit on deforestation for urbanisation. Ironically, a man in the show exclaimed disbelief at the possible arrival of flood during the hottest summer ever! The weather is already haywire. The end of the film features G holding up a new "commandment" tablet - "Thou shalt do the dance." Is that not putting frivolous words in G's mouth? It would have been much more constructive to beseech the audience to wisely love the Earth and all its beings great and small.

G reminded Evan that if he asks, he shall receive, but all the mere praying in the world for the climate crisis to disappear will never work if we do not take the right action to rectify the situation. All of us united will be almighty. Just as we created the problem, we can solve it. The film had a tinge of a doomsday prophecy, about the coming of a flood which might wipe out life. Thus was an ark needed. On a global scale, there is no ark large enough to house all the needy beings on Earth, should the sea level rise too high via melting of the polar caps. Being environmentally conscious is the key "vehicle" to salvation of the planet, not any ark -and no ark can escape the Earth's crisis. In real life, Carell spoke of his hope that God gives him guidance and directs him to make good choices. If G be there, may he indeed do so to awaken the apathetic to make good choices - to face the reality of global warming and to do what they can about it.

"Evan Almighty" implied that G needed Evan to help him help the world. If so, Evan is somewhat an aspect or extension of G. If so, with a more liberal definition of G, we are G too. Another tagline of the movie says with a pun - "Evan help us." If Evan represents the "everyman" (and "everywoman"), we are him too. We are Evan Almighty. Heaven help us or Evan help us? It would be senseless to live in anticipation of divine intervention while not helping oneself. Since the world needs all the help it can get, let us all help the world. A scene showed G manifesting as many different persons on the street, somewhat reminding us that we too can manifest the truly divine qualities of compassion and wisdom to and through one another. Whether you believe in G or not, this is undeniably true.