Are You Alive in the "Land of the Dead"?

Singapore -- From George A. Romero, revered filmmaker and the original creator of the genre of zombie movies, comes this latest instalment of his "undying trilogy" (yes, pun intended). In 1968, he made the wildly successful "Night of the Living Dead". The "end" of that "night" led to 1978's "Dawn of the Dead", which led to the light of the "day" in 1985's "Day of the Dead". In 2005's "Land of the Dead", humankind faces its probable end of days as the zombie infestation pervade the land. 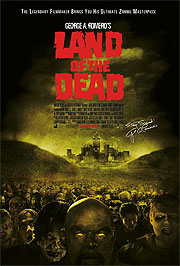 Before you dismiss this as "another Hollywood monster movie", it was, for your information, not made in Hollywood, and is more about human-nature than about any monster. Make no mistake - while it might be seen by some as a blockbuster adventure of mass-appeal about humans versus zombies, it is also a truly lively and intelligent allegory filled with socio-political undertones. Explored Issues range from racism to "speciesism", from power corruption to cultural cannibalism etc.

In the "Land of the Dead", the world as we know of is no more. It is largely wasteland with few human survivors. Hit by an unknown pandemic without cure, those bitten by zombies are infected to become zombies, who in turn create more zombies. Both the alive and the undead threaten to wipeout each other by mutual-hunting, though both face the threat of extinction of their kind from the lack of food.

A rich human ruling class of sorts walled itself within the last thriving skyscraper, while the poor live in the slums below, fortified against zombies beyond its fences. Human merceneries, some of whom are ferocious jealous "asuras", play intermediaries, who venture into the land of the dead - to salvage abandoned necessities for survival for the masses, and luxury items for the powerful god-like few, who form the "upper" management.

What are zombies? They are the dead mysteriously "resurrected". With no clear ability to reason or feel at first, they are relentless organic yet "mechanical" human-eating "machines". Staggering along stiffly and unsure, as if with their past lives' pains, they come to mind as the combination of wandering spirits, hell-beings, hungry ghosts, animals and humans - all rolled into one!

Like restless wandering spirits, they roam the land randomly but somewaht vengefully. Like hell-beings, they seem haunted by their previous lives' hatred and fear. Like hungry ghosts, they constantly crave for food. Like beasts with herd mentality, they have become purposeless predators with no higher cause than living to eat. Is the state of the zombie that of earthly immortality? No - just as the zombies were "reanimated" to life, they can be "unanimated" or killed. In the lack of Enlightenment, rebirth ensues!

Zombies are intriguing probably because they are not exotic legendary monsters from out of the blue; they are much more "down-to-earth" - your neighbour might turn into one! You too if not too mindful! While zombies might be creatures of modern mythology, our world is in a sense already overrun by zombies. In the words of the Buddha, "Mindfulness is the way to the Deathless (Nirvana); unmindfulness is the way to death. Those who are mindful do not die; those who are not mindful are as if already dead."

As in the thought-provoking dialogue of Mike (played by Shawn Roberts) and Riley (played by Simon Baker) when they saw zombies behaving more humanly than usual, "They're pretending to be alive!" "Isn't that what we're doing? Pretending to be alive?" Let's not be caught dead as the walking dead! Nirvana is still the relevant path to true deathlessness! Thank goodness - that unmindfulness, unlike the "zombie-disease", is not contagious! We can all guard our own mind against turning zombie in daily life!

The greatest dream of the forgotten suffering masses was to be able to live as equals in a world without classes or fences - the ideal of a Pureland! With a social structure like the rigidly enforced and unfair caste system in the Buddha's time, the wealthy become more wealthy while disparaging and not truly helping the poor. In the eyes of the despotic and opportunist upper class, everyone else is seen as a mere instrument, a means to sustain one's position. Instead of attempting to narrow drastic class differences, they deviously sustained them by feeding them destructive vices of gambling, sex and drugs for their livelihood and entertainment.

Deluded that their private paradise is truly sanctuary, it was the clinging to it without sharing it that trapped them there instead when anarchy broke out. Like complacent gods fallen from grace, they lost their "palace" in their "heavens" and experienced the desperation of the masses they neglected when the zombies attacked. We can see how easily it is for the powerful humans to lose their humanity to their greed for material comforts, becoming in ways more monstrous than the zombies, who do not even know treachery. However, like zombies filled with mindless greed and ignorance, mindless violence was deemed neccesary for "feeding" both man and monster. As warned by Nietzsche, "He who fights with monsters might take care, lest he thereby becomes a monster."

As Stonepeace put it, "What makes us human is our ability to connect to other humans.
What makes us humane is our ability to connect to those not (so) human." Zombies, like any other carnivorous animals "innocently" living by their instincts to eat to survive, were used for torturous target practice and even as shackled "pets" for amusement. Does this not parallel humans' exploitation of animals for food, fashion and entertainment? But aren't the zombies not really alive? Well, like any meaningful tale, its characters evolve.
The outcasted and literally "Untouchable" zombies began evolving self-consciousness, conscience and emotions as the story unfurled. Shades of grey as to which side is considered good or evil appear as the zombies become an increasingly misunderstood new species of sentient beings. Gradually remembering what it means to be human and humane, their ways resembled savage prehistoric men. Their innocent chancing upon of guns and experimentation with them is a glaring warning of the danger of firearms as convenient instruments of both accidental and intentional violence in modern society.

The humans had earlier discovered that shooting fireworks into the night sky proved an effective means for diverting the zombies' attention - from the fact that they were simultaneously being surrounded for extermination. For some reason, perhaps due to their "newly" evolving curiosity of the unknown and fantastical, the zombies could not keep their eyes off the "sky flowers", losing themselves in their "magic". However, right after the dissipation of the last sky flower, they instantly "come back to earth", aware again of their present situation.

Some look puzzled, as if musing vaguely on the meaning of the transient sky flowers and how it related to their existence. Maybe they were on the verge of realising the universal characteristic of impermanence! Eventually, the sky flowers ceased to attract or distract them, as they learnt to stay focused on what was more important in the moment - for their survival. Is this not the evolution of mindfulness? At this rate, the zombies might become truly human again. The cure for the "zombie-disease" then, is indeed mindfulness! But enough about them - what about us, the occasional human zombies? Are you truly alive? Or do you dwell here as an mindless denizen from the land of the dead?