Singapore -- John Farley (played by Seann William Scott) is the bestselling author of a self-help book titled "Letting Go: How to Get Past Your Past". As he described, "It teaches people how they can release painful memories so they can rebuild their self-esteem." 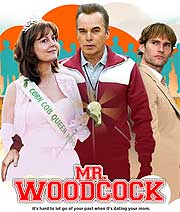 As he visits his hometown to receive an award for his achievement, he realises the bitter irony that he has difficulties in practising what he preaches... when his past returns to haunt him - as a former high school gym teacher - the menacing alpha male that is Mr. Woodcock (played by Billy Bob Thornton). Woodcock has become, to his horror, his mother's love interest. Backsliding, John gets flashbacks of painful memories of Woodcock, while he struggles to keep his self-esteem.

Though a comedy, the film delivers some lessons on the nature of attachment and "letting go". John was attached to his past unhappy experiences of being "bullied" by Woodcock, such that he not only maintained, but develops further prejudice against him - by subscribing to hearsay and speculation against him, while being blind to his "sweeter" side. Woodcock however, was also attached - to the unforgivingly harsh teaching methods he still uses after all these years. Thus, the duo gets caught in a battle to prove their worth and "philosophy". Of course, the battle is sustained by attachment to their egos and views, which none wished to let go.

John loses mindfulness of his own advice - "When you make a blame sandwich, you gotta be prepared to eat it yourself." In other words, when you blame someone for your unhappiness, you are often the actual one to blame. While others might condition our happiness to some extent, no one can essentially cause us to be (un)happy - because happiness is a choice, determined by our attitude despite the circumstances. If true happiness depends on countless external factors, there would be virtually no way to experience it!

When Woodcock throws his book on letting go into a fireplace, John probably realised he should let go of letting go! Paradoxical as it might sound, John realised that he was attached to wanting to let go of the past. It struck him that there was no need to, as the past, even if it includes terrible experiences, shaped him to be who he is presently - a success story. In fact, he should even be grateful to Woodcock - for intentionally or accidentally playing the role of a "wrathful Bodhisattva", helping to shape his character to have "backbone". Why focus on how the Woodcocks of your life had hurt you, when they have also strengthened you?

"You don't get past your past - you embrace it." But if this embracing becomes attachment instead of acceptance, it becomes a new problem. The only "things" we need to let go of, of the past (or present or future), are our defilements which cloud it - our attachment, aversion and delusion. Forgive and forget? Forgive, yes, but there's no need to forget the lessons learnt. Resentment only makes one suffer needlessly, endlessly. In fact, bearing resentment while missing self-reflection is the way of the foolish. Why suffer fools, especially by being a fool too? Digging up the past does not muddle up the present - not as long as it is done mindfully to (re)discover missed lessons. This can only make the present even more clear. Even the Buddha-to-be realised many enlightening lessons when he recollected his past lives!