Singapore -- "Shoot 'Em Up" showcases much dramatisation of many imaginative gun stunts. Outrageous as some of them might seem, the film is also a subtle statement on the issue of gun control. It appears to be paradoxically celebrating while condemning gun culture, glamourising while showing its grosser side too. One might consider it a creatively out-of-the-box movie - a film heavily "armed" with both guns and social conscience. 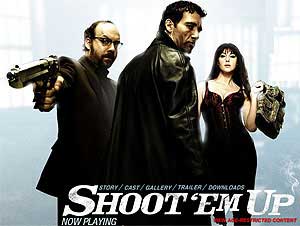 Of course, it is the hero, the righteous stranger Mr. Smith (played by Clive Owen), who pulls the fancy stunts with swift but mindful measure, as opposed to the villainous Mr. Hertz (played by Paul Giamatti), who simply blasts his guns away in rage. (By the way, "being angry reduces IQ temporarily".)

It's all for entertainment though. As Hertz put it, "Besides, violence is one of the most fun things to watch." "Interesting" to watch perhaps, only when we know it's not real, while it's never nice to experience or inflict it on another.

Extending the common idea that "guns don't kill - people do", Hertz remarks with maniacal glee - "But they sure help!"

That's the problem, isn't it? Guns help to support violence, even though they are supposed to curb it. Fighting fire with fire often adds fuel to the fire... use of guns is a last resort indeed, and only for worthy causes, if ever to be considered. Guns don't kill people; fear and hate does. Incidentally, the Buddha taught the trade in weaponry to be an unskilful livelihood - because it perpetuates the instruments of violence.

The carrot-chomping Mr. Smith even uses carrots a couple of times to jab henchmen out to kill him. A good example perhaps, of how things are inherently empty of any fixed characteristics. What feeds for survival can kill for survival too! What for defence can also be for offence. Like the "empty" nature of guns, carrots can be both helpful and harmful.

Does the prevalence of easily available arms spell greater security or danger? Granted that some might truly need them for safety, shouldn't they be made available only to them? Ironically, the more guns there are, the more might be deemed "needed" to control them. Is gun control spinning out of control? As in the praiseworthy moves of powerful nations to foster world peace by disarmament of weaponry, disarmament should begin at home - in the mind, by giving up needless grudges and paranoid suspicions. Less guns please, and more understanding. To prove his point on the urgency of gun control, Smith shoots a corrupt politician about to lobby for the big business of gun sales. The full circle of violent yet poetic karmic payback?

The wielding of a gun easily gives rise to an illusory sense of power - when a gun is only as powerful as the mind that holds it is powerful in wisdom, that is aware of how it should be used (or not). Just pass a gun to a severely bullied but rash person and see how his or her eyes gleam with speculation of its vengeful potential. Scary stuff indeed. The ease of using firearms also implies the ease of abusing them. It's all too easy to "go" at a squeeze of the trigger, be in upon others or oneself - accidentally or intentionally. Just recall "Bowling for Columbine". As Hertz put it, on warning Smith not to play with (gun)fire - "Eggs have no business dancing with stones." Ironically, Hertz was a egg too, to "dance" with Smith's gun-wielding talents.

Even villains have family members they love, who love them too, as we see Hertz making calls on and off to his neglected wife. Is there not some good, something lovable or capable to be so in all? How then, can we be "villainous" to the villainous? Why be a villain at all? Why not give up villainy? Unfortunately, Hertz does not give up in time. From hate to love and love-making, there is a comical scene of simultaneous rough sex and violence during a shooting spree. Intriguing how sex and violence can be closely intertwined - as the intense throes of passion - of greed and hate manifested as lust and destruction. Sex is preferred "violent" by some, while violence is considered "sexy" by some too. "Twisted" or not, that's what makes the nature of Samsara!