Singapore -- "The 11th Hour" is one of those documentary movies where a review of it can never do justice to its message. If I could, I would simply reproduce the transcript of the film here, and add Buddhist perspectives to it, so as to further foster the urgency of the message. The next best thing is to share views on the featured bites - especially those which I resonated with strongly. 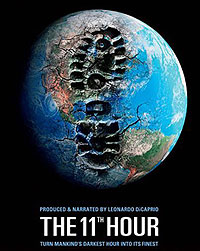 Featuring a diverse mix of field experts on the climate crisis, "The 11th Hour" can be seen as a follow-up of sorts to "An Inconvenient Truth", which won the 2007 Academy Award for Best Documentary. Produced by the two-time Academy Award nominee Leonardo DiCaprio (who is a friend of Al Gore), here's another case of someone skilfully using personal fame and fortune to give voice to an important cause. Come to think of it, fame and fortune is otherwise rather useless. If we are as eager in helping the environmental cause as we are in paying attention to celebrities, there is hope as yet!

The climate crisis is a reality. This has to be emphasised. It is not some theory that can be brushed off. The opening of the film attests to this by showing footages of recent global weather gone haywire - ranging from floods to droughts. The warning signs are more than ample. For instance, the very next day (24th October 2007) after watching the film, the news has it that the worst wildfires in the history of California have broken out, having razed more than 106,800ha of land. With some 655 homes destroyed, 265,000 people had to evacuate.

When asked how the disaster would unfold in the light of upcoming hotter temperatures and high winds, the state governor Schwarzenegger (who happens to be quite ecologically conscious) remarked that "we are relying very much on the weather". Ironically, the weather very much relies on us too! Even if we might not strongly personally feel this to be the planet's 11th hour, it is definitely so in many places - such as the above. If we further neglect the environment, it's a matter of time that we experience the fuller wrath of nature in person.

There is this "(un)natural" tendency to separate humankind from nature. Thus is there the solid demarcation between natural and human-made disasters. The climate crisis shows how the duo are more inter-related than usually imagined. Human actions have effects on the environment, which can rebound to us via the web of cause and effect as the natural "blessings and curses" of nature. In Mahayana Buddhism, karma is taught to be expressed naturally via the positive or negative effects of nature too.

Neglect of the environment via actions of greed, hatred and delusion creates negative karma, which results in the experience of suffering. In this sense, there are truly no such things as freaky natural "accidents" or "disasters" - for as long as humans are experiencing these effects of destruction, the fruits of karma are simultaneously being reaped. As such, in Pure Lands shaped by the perfected merits of Buddhas, there are no "natural disasters".

As conservationist David Suzuki remarks, "like inside, like outside" - the state of the world reflects our minds. The cause of the planet's illness is our attitude to it. "When the mind is pure, the land is pure." A purified mind would not desecrate the world. The solution to the crisis is "love" (unconditional compassion) - for all life (flora and fauna) on Earth - by taking care of their living environment - the seas, the lands and the skies.

The overall impression that one gleans from the intricately inter-linked information presented in the film, is the emphasis on humans and nature being a single interwined entity. The Buddha called this (inter)dependent origination. Zen Master Thich Nhat Hanh calls it "interbeing". We do not exist as standalone entities; we inter-are. As a scientist pointed out, our body itself constitutes of "non-human" elements of nature. There is no single part of us we can label as truly uniquely "us". It is the illusory ego that wishes to assert itself, to see itself as different.

Life is possible because there is a web of interconnecting exchange of resources. We are not masters of the biosphere that encompasses all life on Earth - we are only parts of it. We are of nature too, not separate lords of it. The subsystem of the economics of greed should never had been mentally segregated from the parent system that is the biosphere. Anyway, if humans truly imagine themselves to be kings of nature, they should protect it; not exploit it. Having stretched the Industrial Revolution too far and fast, we need the Environmental Revolution now.

Nature's interbeing is so intricate that when flora and fauna within a seemingly self-contained system is jeopardised, domino effects echo to the other elements in the system. Ecosystems interweave with one another more than we can ever imagine. Thus, it is erroneous to assume it is alright to take care of only "a few" neighbouring ecosystems out of "many" - because there is only one seamless biosphere!

When ecosystems continually break down due to human destruction, a critical tipping point will eventually be reached - when the biosphere can no longer sustain human existence. This 11th hour is the race against time to make sure enough efforts are exerted to prevent this from happening. Ignoring the green cause together would be mass-suicide. Environmentalism used to be the passion of the few, who were then mistaken as fanatics. However, if we were all enthusiastic in being green, the 11th hour would never had been reached. This is thus the best time to pick up the enthusiasm - for yourself, if not for your neighbours and your kids (and their kids).

While many fingers are often pointed at the big corporations' "relentless" creation of carbon emissions, toxic waste and such, we too are responsible - for the sustenance or boycott of their products and services is up to us the consumers. We vote for a better future by choosing what we buy. Frugality helps too - by getting only what you really need, by reusing materials as much as possible, before giving them away or recycling them. Remember - "You can never get enough of what you don't really need." And when you live a "throwaway" life, you throw away your karmic blessings too. Why not "renew" them? Why not endorse that which is eco-friendly, made possible from clean abundant energy (such as using power generated from the sun and wind, consuming food that is organically grown...)? When we support the better choices, the greener industries will grow. Why lament of your impact being limited? If all of us are to take good care of the "pixels" of where we are, which make up the bigger mosaic picture of life, the whole picture would be nothing but beautiful. If you feel that your leaders are not doing a good job leading, you can lead by example - by effecting whatever changes you can in your power.

Though there was brief mention of the oceans being overfished and over-polluted, as in "An Inconvenient Truth", another "inconvenient" truth was skipped in this film - there was no mention of the horrendous ecological impact of meat-eating. However, Leonardo DiCaprio, like Leonardo da Vinci, is vegetarian in real life. From Time Magazine - "Which is responsible for more global warming: your BMW or your Big Mac? Believe it or not, it's the burger. The international meat industry generates roughly 18% of the world's greenhouse-gas emissions - even more than transportation - according to a report last year from the U.N.'s Food and Agriculture Organization. Much of that comes from the nitrous oxide in manure and the methane that is, as the New York Times delicately put it, 'the natural result of bovine digestion.'

Methane has a warming effect that is 23 times as great as that of carbon, while nitrous oxide is 296 times as great. There are 1.5 billion cattle and buffalo on the planet, along with 1.7 billion sheep and goats. Their populations are rising fast, especially in the developing world. Global meat production is expected to double between 2001 and 2050. Given the amount of energy consumed raising, shipping and selling livestock, a 16-oz.T-bone is like a Hummer on a plate. If you switch to vegetarianism, you can shrink your carbon footprint by up to 1.5 tons of carbon dioxide a year, according to research by the University of Chicago. Trading a standard car for a hybrid cuts only about one ton - and isn't as tasty."

Beyond individual efforts, the movie also suggests the credibility of large-scale solutions to undo the damage to the planet. The stitch in time is still possible. Technicalities are no issues. What required is heightened awareness of the climate crisis and the individual solutions we can take, and more public opinions to press for the improvement of ecologically unsound policies. On the way out of the cinema which premiered "The 11th Hour" in Singapore, I read these words on the back of a shirt - "Climate change is not about saving the environment... but ourselves." Yes, the Earth has all the time in the world to heal itself, even if humankind destroys itself - it is us who are running out of time. Will this be our darkest or finest hour? We decide. You are part of "we" - you decide too. Do take action during this 11th hour. Please check out what you can do at www.11thhouraction.com. As Al Gore put it, this is our "generational mission". The time is 23:59:59 - this is the moment to save the world!