The Real Love of "Lars and the Real Girl"

Singapore -- In the bittersweet movie "Lars and the Real Girl", which is poignantly funny but never ever mean, Lars (played by Ryan Gosling) is not just shy... for he is literally "painfully" shy. 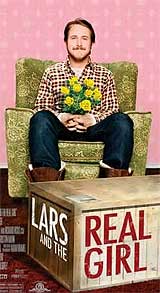 Perhaps due to the trauma of his mother passing away while giving birth to him, he shies away from human contact as much as he can. A mere touch of the hand is deemed painful to him, much more horrendously so a hug.

While the audience might dismiss that as mere attachment, aversion and delusion at play, it feels genuinely painful for Lars. That's the power of the mind, being able to "create" physical effects from psychological ones - for better or worse. As the Buddhist saying warns, "Be master of mind or be mastered by mind."

One day, the very lonely Lars buys a life size girl doll online. Nope, nothing "dirty" happens. This is a story about love, not lust. His delusional disorder takes a giant leap forward when he introduces it as his conservative girlfriend Bianca, who needs a wheelchair to move around. Dismayed at the turn of events, his family was further dismayed by their doctor's advice to go along with his delusion, which seems rather firm anyway. As the doctor advised, "Bianca is in town for a reason." Uncomfortable at first, the family and friends of Lars tried to take Bianca as seriously as Lars did.

Intending to connect deeper to Lars via interaction with him through involving Bianca, she eventually becomes larger than life. For instance, the neighbourhood invites Bianca to charity functions, to parties, and even cuts her hair. At one point, Lars suddenly realises the love of his life to be more and more busy with the company of others, with less and less time for him. Breaking down, he laments that no one really cares about him. To that, his sister-in-law Karin (played by Emily Mortimer) emotionally cries out...

"Every person in this town bends over backward to make Bianca feel at home. Why do you think she has so many places to go and so much to do? Huh? Huh? Because of you! Because - all these people - love you! We push her wheelchair. We drive her to work. We drive her home. We wash her. We dress her. We get her up, and put her to bed. We carry her. And she is not petite, Lars. Bianca is a big, big girl! None of this is easy - for any of us - but we do it... Oh! We do it for you! So don't you dare tell me how we don't care." How touching... and oh, the things we do out of love! Even under such distress, out of love for Lars, Karin never screams at him that Bianca is not a real girl.

Perhaps Lars was all along subconsciously attempting to connect to another human, so much so that that he decided to take Bianca to be real. A safe baby step indeed - for how dangerous or hurtful could such a self-concocted relationship be? This however, indirectly led him to increasingly connect with other fellow humans. From his delusional attachment to Bianca, he gradually lets her go when he painfully imagines her dying, even burying her. With her demise, he steps out of his comfort zone of delusion. All that is left is the reality and real love around, that he has grown to accept and reciprocate. His relationship with Bianca was his bizarre yet effective way of learning to love and to let go. Universal lessons indeed - which we all need to learn!

Even though Bianca was not a real girl, she was real enough for Lars. Most of all, the flood of compassion expressed to Lars through her by so many was real. What else can we do, with our delusions and all, other than to work with them? And thankfully, this needs not be a lonely journey - if there are others around to help us awaken skilfully, or even accidentally. No one saw Bianca as a joke - the whole town was full of Lars' compassionate and willing personal "Bodhisattvas". Even Bianca was a silent "Bodhisattva"! Coupled with wisdom, it is so true that love will save us all. If so, may we all be Bodhisattvas to one another - real Bodhisattvas!