A testament to faith

The first animation about the life of the Lord Buddha finally comes to the big screen Published on December 5, 2007

Bangkok, Thailand -- It's been a long and sometimes lonely pilgrimage for devout Buddhist Wallapa Pimthong but today, four years since she embarked on her labour of love, the first Thai animation on the Buddha's life, "Phra Phutthajao" ("The Legend of Buddha"), opens at theatres nationwide. 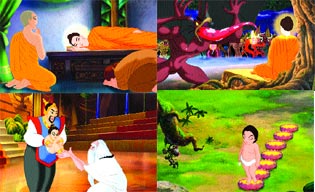 The movie, which celebrates His Majesty the King's 80th birthday, has received approval from the Royal Institute.

When The Nation spoke to Wallapa five months ago, she was desperately searching for another Bt20 million to finish the project, having already spent Bt80 million of her own money and fallen out with her family.

"With such a huge budget involved, we had to be careful about potential partners. We could only take money from companies or organisations suited to our operation," she explains.

Fortunately, several state and private organisations came to the rescue, among them the Young Buddhist Association of Thailand under royal patronage, the Culture Ministry, Muang Thai Life Insurance and the Nation Group, and Wallapa was able to finish the film for Bt108 million and also come up an additional Bt12 million for promotion.

"I'm overwhelmed that we could finally complete the project and that we were able to meet our goal of releasing it to celebrate the 80th birthday of His Majesty the King," she says.

Wallapa is also pleased that her film has passed the scrutiny of Buddhist University Mahachulalongkornrajavidyalaya.

"They didn't find anything wrong. On the contrary, they congratulated us for what we've accomplished."

But the film's director, Assoc Prof Krismant Whattananarong, admits that the story is not 100-per-cent accurate, explaining that some allowances have been made for entertainment purposes.

The director, who is also a lecturer at King Mongkut Institute of Technology North Bangkok, hopes that the animation will reach the young generation and teach them more about their religion.

"Other religions have symbols to which everyone can relate, for example the cross on which Christ was crucified. Many Buddhists don't have a reference point beyond the Buddha - they've never heard of Pimpa or Rahul. We deal with religious faith in a very abstract way," he says.

This film, he says, will create more tangible images to which Buddhists can relate.

The Thai crew has done a stunning job in developing the 2-D animation, which depicts the life of the Buddha from his birth as Prince Siddhartha to his departure from his palace and wealth in search of enlightenment to his attainment of nirvana.

The animation style is likely to remind viewers of "Pocahontus" and "Mulan", a comment the director accepts since the 120-strong team comes from Thai Wang Company, which handled Disney's animations for more than a decade.

Many actors and personalities voice the characters, among them Vit Vijitranon, Thassawan Seneewong Na Ayutthaya and Phitsamai Wilaisak. The most coveted role - Buddha's voice after he attains enlightenment - went to Ratchata Samorntinnakorn, a DJ at FM105 MHz. At first the director intended to create the voice using a digital process but later changed his mind.

"We wanted an archetypal type of voice, one that characterises the Buddha's compassion and kindness. Ratchata has the right voice and he worked very hard during the dubbing," says the director.

Kaiwal Kulwattanothai is responsible for the soundtrack and combined three different genres together - ancient Indian, Thai music and orchestral - to portray the emotions of the movie.

The composer, who was also behind the success of "Khoo Kam the Musical", says he also introduced the Soraphanya melody, which is used in religious recitations.

"The Soraphanya creates a sacred atmosphere and is appropriate for the story," says Kaiwal.

Wallapa plans to donate Bt8 million to the King for charity and then use the remaining income from the film to repay those who have put themselves in personal debt to help the project. These include Krismant, who mortgaged land, as well as TV host Thankun Jititsara who mortgaged his house.

"I have to pay those debts first," she says. "As far as my personal investment is concerned, it's no big deal if I don't get the money back. I'm just happy that I've finished the project."

And despite all the struggles, Wallapa and Krismant are already talking about another Buddhist movie - this one, they say, to tell the story of a bhikkuni, a female monk.