How "The Golden Compass" Points to the Golden Dharma

Singapore -- The film "The Golden Compass" is based upon the starter of Philip Pullman's "His Dark Materials" trilogy . It is the fantasy tale about young Lyra, who lives in a universe parallel to ours. It mostly resembles ours, other than some key factors. 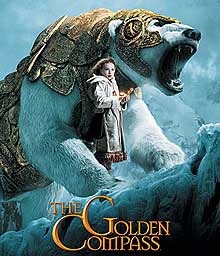 Firstly, with no technology that seems very high yet, the sciences are still maturing, while co-existing with witches wielding "magical" powers and such. Secondly, every human has an external yet psychically linked counterpart - a daemon (not to be mistaken as a demon) in the form of an animal, which represents the "soul" of the person. Think along the line of "spirit animal", where one's daemon is the animal that is most similar to one's personality.

Thus, the interaction of humans with their daemons lets the audience (and readers) see and hear their "inner dialogues" with themselves. Just as one's untamed "monkey mind" seems to have "a mind of its own" at times, daemons can be wild and restless. In the case of Lyra, being a feisty child with an unsettled daemon, her daemon shapeshifts into various forms with her changes in thoughts and moods. The fidgety nature of daemons clearly show they are not static "souls" - which Buddhism refutes to exist as any intrinsically fixed entities. Instead, like our minds, there are "mindstreams" of flowing and fluxing energies of consciousness. Without "changing minds", no being would be able to evolve spiritually.

In the world of "The Golden Compass", some other worlds are described to have animals distinctly separate from humans. Ours would be one - though we co-exist too - sometimes harmoniously and sometimes not. Yet even if we do not have animal daemons, we might have animal-natures within us - yet to be nurtured and "domesticated" by our Buddha-nature! It is interesting that while humans have animal daemons, a tyrannical bear in the story craves for a human daemon. However, his crude and savage ways hint that he needs to cultivate his humanity by conquering his bestial side, more so than to crave for a human counterpart. A matter of priority. Likewise, when our animal-nature is let loose to wreck havoc, we lose our human-nature.

For the uninitiated, with talking animals and "magic", there might be the tendency to think "The Golden Compass" is somewhat similar to "The Chronicles of Narnia". (See http://www.buddhistchannel.tv/index.php?id=12,2161,0,0,1,0 for review of its latest movie: The Lion's Roar Echoing Through "Narnia") However, the underlying messages are very different in spirit. The Narnia Chronicles were originally written to also subtly promote Christianity, while "His Dark Materials" have been accused of being anti-Catholic. Due to perceived anti-Catholic themes in the novels, the Catholic League had called for the boycotting of the film, as while the film's religious elements might be diluted, children might be enticed to read the novels, which were said to "denigrate Christianity" and promote "atheism for kids".

From Wikipedia, 'Pullman has since said that the books do not have a religious agenda, saying of Donohue's [President of the Catholic League] call for a boycott, "Why don't we trust readers? Why don't we trust filmgoers?" In a discussion with Donohue on CBS's Early Show, Ellen Johnson, president of American Atheists, said that rather than promote atheism, the film would encourage children to question authority, saying that would not be a bad thing for children to learn. Director Chris Weitz says that he believes "His Dark Materials" is "not an atheistic work, but a highly spiritual and reverent piece of writing"...' For more enlightening yet probably more "dark" materials on the nature of atheism, please see http://www.moonpointer.com/index.php?itemid=1896 .

Intrigued and curious about the "compass debate"? Read the trilogy and watch the film for yourself! As the Buddha encouraged of the spirit of free enquiry, "Ehipassiko" - don't just believe (or disbelieve); come and see; investigate and reflect personally; decide for yourself mindfully. Quoted from the film, for advancement, "centuries of tolerance and free inquiry" should not simply be disposed. A Buddhist teacher once joked about "free-thinkers" - Buddhists are the freest of all thinkers because they are free to think! Lyra's world is also one of much debate. The scientific community lives in tension with a seemingly religious and dogmatic dictatorship called the Magisterium, which aims to dominate not just this world, but all parallel ones with the preferred version of their "truth". In the original books, they represent abuse of power by organised religion. Weitz said "in the books the Magisterium is a version of the Catholic Church gone wildly astray from its roots". However, the film's Magisterium is supposed to represent all dogmatic organisations.

The Magisterium speaks of human ancestors who have made mistakes, which should not be passed down to the young. Indeed - for any "original sin" of our ancestors not only should not be ours, it cannot be. They kidnap children to forcibly separate their daemons from them, supposedly for their own good - rendering them "soulless". Perhaps this is a metaphor for the quelling of their streaks of rebellious inquisitive nature, nipping them in the bud, rendering new generations docile. Yet members of the Magisterium retain their own daemons - a hypocritical case of not practising what is being preached. The Magisterium's fear was the discovery of the nature of "dust" which interconnects all - which seems to allude to particle physics? If great knowledge of the natural truths of the world is found, their unstable beliefs and thus authority based on them would be threatened. Is this reminiscent of the Inquisition? The situation becomes a political instead of a spiritual struggle.

Lyra chances upon the Golden Compass, technically called the alethiometer, with which she is able to peer in to seek not just directions, but also to see the truth. In a sense, the compass represents the path to the ultimate authority - for the objective truth must be the authority, not any other "authorised bodies or persons" branded to be monopolising the truth. The ultimate truth must be the one unchangeable "magnetic north" for all seekers of the truth. In Buddhism, it is the onus of everyone "to know and to see" the truth in person. Strictly speaking, any truth that cannot be personally experienced might be the true heresy; just as a so-called "truth" that one disagrees with another who labels you a heretic... might be heresy too. The Magisterium seeks to covet the compass and use it to conquer worlds, and to prevent others from using it to discover the "true truth", which is different from their version of it.

"The Golden Compass" is about the courage to defend and spread the objective truth - the rebellion of truth-seekers against truth-benders. Rather than selfishly fighting for subjective truths, it is about the struggle to discover the ultimate truth for the welfare of all. Lyra faces her fears in her quest to do so. True to this idea, Buddhism speaks of the conquest of all fears or the mastery of fearlessness - via realisation of the truth - for it is delusion, or fear of the unknown or untrue that keeps us afraid. The compass tells the truth, letting the wise user see things as they really are... yet skilful questions must be asked for it to be useful. Beyond just having the answers, taking action aligned with them is needed. In Buddhism, the Golden Compass would be the golden Dharma itself! To Buddhists, the direction it points towards liberation is clear!