The "Resident Evil: Extinction" Within

Singapore -- In “Resident Evil: Extinction”, an unscrupulous scientist not only made humans into zombies, he next attempts to elevate them to be “sub-humans” with more intelligence, so as to create cheap “domesticated” labour. 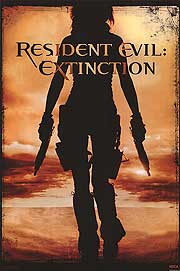 This reminds us that a true human is not one by form, but by one's amount of humanity. In his case, despite his “obvious” human form, his lack of humanity renders him more demonic (or an asura - a titanic demi-god hungry for power) than human. True to this idea, he later forcibly mutates himself to become a super-monster.

The super-heroine Alice realises that there were countless clones made of her - each used to experiment for their intelligence - to see if the next clone has evolved or is able to evolve to be better than the previous. This calls to mind the idea that if we do not consciously improve ourselves life after life, we are reborn as nothing much more than karmic “clones” of ourselves from our previous lives. A case of spiritual stalemate.

Thus, not having any spiritual breakthrough in this life would be an utter waste of this precious human rebirth. The original Alice featured throughout in the “Resident Evil Trilogy” represents the process of successful evolution through personal altruistic choices and efforts to become a heroine. Though not in the “classic” spiritual sense and more in the worldly sense, this would nevertheless be an example of skilful evolution - as her compassion and wisdom grows considerably by this third instalment.

It is interesting to note the truth of interdependence in the symbiotic and relative relationship between the super-villain and the super-hero(ine). In this case, the villain figuratively and literally “creates” the heroine, albeit not purposely. This is reminiscent of how the Ascetic Gotama (who later became the Buddha) was in a way “conditioned” or urged to improve in his spiritual career by his “evil” cousin Devadatta through the course of many lifetimes. In fact, in Mahayana Buddhism, Devadatta is generally seen as a “Bodhisattva” of sorts, be it intentionally and/or accidentally, who plays a crucial role as an adversary for the perfection of the Buddha's spiritual quest. As Stonepeace put it, “Mara's advocates can also be Bodhisattvas' advocates.”

A human who was infected by a zombie gradually becomes a zombie, as his mindfulness of his humanity slips away. This presents a moral dilemma. Form aside, when do we decide a human is no longer human? Not that the zombie phenomenon is real (at least not now), this question becomes more important if the protagonist is us. If we are infected to become a zombie in time, when do we decide it is a better idea to terminate our own lives to prevent harming others? Do we decide or let the others decide? Will we be brave enough to do the right thing? But what is right? With our present humanity which is seeping away, we can still do good, while there is the impending risk of anytime turning into a full-fledged monstrous zombie who kills other humans. What if a cure might be found in time? These rhetorical questions aside, while we are human in this moment, it is wise to mindfully sustain and increase our humanity - to never lose ourselves to our bestial animal (or even demonic or “hungry ghost” ) instincts - to become “mindless” zombies.

As in most typical action thrillers though, the heroes and heroines also have genuine strong aversion as a driving force to eliminate their archenemies, who happen to have the same strong aversion towards the good guys and gals. Spiritually speaking, aversion is negative, be it directed towards another good or bad. The greater spiritual path would be to transform one's aversion to become compassion, to “eliminate” one's enemies by eliminating one's enmity towards them, while using more skilful means to halt or even transform the evil into good. Thus, killing should always be the last resort - and must be done out of altruism, not vengeance.

The truth is, the real “Resident Evil” is the trio called the “Three Poisons” - the residential greed, hatred and delusion within our minds! Will you bring them to extinction? It was Sun-Tzu who taught this in “The Art of War” - “Know thy enemy and know thyself - a hundred battles fought and a hundred battles won.” Stonepeace has an alternative take - “Know thy enemy is thyself...” As the Buddha put it, “Greater than one who wins a hundred battles, is one who conquers oneself.” When one's inner demons have been conquered, one naturally becomes undefeatable by any outer demon.