Singapore -- Perhaps, our fascination with vampires is more subconsciously metaphorical (in multiple layers) than literal. Using Buddhism to analyse, the savage vampires in "30 Days of Night", who only live to feed would most strongly resemble hungry ghosts by their psyche. 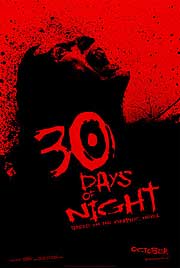 Hungry ghosts are beings who are filled with constant insatiable craving. Beyond the literal hungry ghosts, there are other forms of "human hungry ghosts" in our midst too.

Mindless continual consumerism to satisfy needless greed would be hungry ghost behaviour too. Just as anyone of any age anywhere can turn into a vampire, the case is similar for "vampires of materialism". Even children can be conditioned to be relentless consumers. For a great video presentation on the complex interconnected evils of excess consumerism, please visit http://www.storyofstuff.com .

With both overwhelming greed and miserliness, the vampire leader in the film paradoxically craves for his kind to thrive, while not desiring the creation of too many vampires, which would mean a lesser supply of human blood to drink. This is awareness of the ills of consumerism to some extent! Craving is ultimately self-limiting.

Without deathly skin tones and razor sharp fangs, it is much less easy to spot the "vampires" among us. Other "human vampires" would include "vampires of energy", who drain not your blood but your energy - with their unceasing demand for attention and such.

Though there is the Buddhist practice of generosity includes the appropriate giving of time, effort, wealth, comfort and the Dharma, there are devious vampires indiscriminately "sucking dry" these resources too. It wouldn't be bad to be a "Dharma vampire" though!

The more the merrier!

The vampires in the movie had spent centuries rendering their existence to be nothing more than "bad dreams" of humans. However, the living nightmare of more subtle yet more devastating forms of vampirism are already here with their infectious viruses... as listed above.

The worst "vampire effect" is how victimising vampires turn their victims into victimisers too, intent on collectively draining entire communities before attacking the next. The plague of over-consumerism based on mindless greed for instance, is taking its unbearably heavy toll on the planet's resources, while seriously endangering global climate and the welfare of fellow humans and animals.

While cutting off the heads of vampires is the easiest way to terminate them in the film, cutting off the root poison of greed is the remedy for all other "vampires". While it takes sunlight to vanquish the usual vampires, it takes the light of mindfulness and truth to "reform" the real "vampires" among us.