Singapore -- "I am Legend" is a "scientific" and thus plausible reinvention of the vampire myth set in the near future, when most humans have either been killed or are infected by a viral cure for cancer, which had mutated into a virus that transforms humans into ravenous nocturnal sub-humans (who can be killed by ultra-violet light). 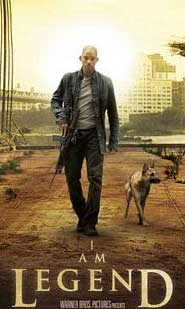 Heard of the difference between eating to live and living to eat? These "dark-seekers", who crave for human flesh are the latter. "I am Legend" is the "legend" of how the self-sacrificial protagonist became legendary.

The immune virologist Dr. Robert Neville (played by Will Smith) is a lone human survivor living in New York. Determined to stay at ground zero to concoct a cure for the dark-seekers' condition, which would also be a vaccine against the condition, he is a hunter for dark-seekers by day - to gather as subjects for his experiments, while he is hunted by night - by the same dark-seekers. This is surely Bodhisattva action to a great extent - imagine striving to heal those who only wish to devour you!

The only living friend Neville has is his dog, whom he relates to like a human. He bathes her, exercises with her, drives with her, and even reprimands her for not eating her vegetables. Both treasured their loyalty to each other. This deep appreciation of his animal friend makes it hard to understand why he seems to occasionally hunt deer for "fun" - especially since he already has "unlimited" piles of pre-packaged food to eat. We see a lioness pouncing upon a deer for her family to eat. That's the difference isn't it? Most animals kill to survive, while some humans do it for amusement.

Thoughts on the ethics of animal-testing might cross the minds of the audience, when we see Neville sacrificing many rats to test for the cure. Science should be advanced enough, if not already so, to not require testing upon countless innocent animals. The ethical issue becomes more controversial when we realise that Neville tests upon dark-seekers, thus sacrificing many of them - the very ones he was trying to save. Just as the dark-seekers are not really non-human, likewise, animals, such as his kindly dog, are not purely bestial. None are "mindless zombies". Surely, Neville would not test on his family members if they turned into dark-seekers? Why should our humanity end for other sentient beings?

With the lack of human flesh, the dark-seekers turned upon their own kind, becoming cannibalistic. Come to think of it, human flesh-eaters are in a sense "dark-seekers" too - when we feast upon animals, who might had be our human relatives in previous lives. If so, we ought to practise equanimous compassion to animals too. The meticulous ways humans acquire their meat, though unseen or neglected by most, are much more horrendous than the way the dark-seekers do it. Humans systematically trap, breed (under torturous conditions) and slaughter millions of animals every day - just to satisfy the greed for meat.

How truly civilised or humane are we as a species when we continually subject weaker sentient beings to boundless pain and suffering? As Gandhi put it, "The greatness of a nation and its moral progress can be measured by the way its animals are treated." In this vein of thought, for humans to progress, for us to advance in our humanity, it should never be at the cost of losing our humanity towards fellow sentient beings. As the Buddha described of his universal compassion, "I have love for the footless, for the bipeds too I have love. I have love for those with four feet, for the many-footed I have love."

Neville painstakingly does a radio broadcast daily - to any human who happened to be tuning in. He generously announces his offer to provide food, security and shelter. This is likened to the Mahayana idea of how, out of great compassion, the Buddhas in the ten directions are constantly teaching the Dharma - for any being who has the karmic affinity to tune in psychically. Neville loses his cool though, when his dog became infected. His compassion for the dark-seekers gives way to anger, as he attempts to run them down with a car. Such is the nature of imperfect compassion, while perfect compassion knows no rage - even under extreme pressure.

Existential questions about God arise early in the film - when we see a faded poster against the backdrop of a post-apocalyptic "God-forsaken" New York - "God still loves us (Do we still love God?)" While Neville remarks that "There is no God!", he doesn't blame "him" for the plight of the human condition. He retorts, "God didn't do this - we did!" Indeed so. With the prevalent abuse of drugs such as antibiotics (which are also animal-tested) and such these days, humans are unwittingly creating "unnatural" superbugs which are harder and harder to cure. When that meant to be medicine is misused, it becomes poison. Instead of speculating on an "absent God", Neville diligently assumed his role best he could to save humanity - by "playing God" as a research scientist. Self-reliance!

When a fellow survivor suggested the presence of an unknown underlying divine plan, Neville laments - "All right, let me tell you about your 'God's plan'. 6 billion people on Earth when the infection hit. KV [Krippen Virus] had a 99% kill rate, that's 5.4 billion people dead. Crashed and bled out. Dead. Less than 1% immunity. That left 12 million healthy people, like you, me, and Ethan [survivor's brother]. The other 588 million turned into your dark-seekers, and then they got hungry and they killed and fed on everybody. Everybody! Every *single* person that you or I has ever known is dead! Dead!"

However, there turned out to be a survivor colony, to which a discovered cure was finally sent to. In a final showdown, where hordes of dark-seekers rampage through Neville's armoured house to take him down, he desperately tries to communicate to them that he has the remedy for their "sickness". Of course, they don't even understand they are "ill". Seeing him as taunting them, they are further enraged. This is reminiscent of the idea that during the darkest period of the Dharma-ending age to come, even the most skilful of Bodhisattvas cannot convince heavily-deluded beings of the preciousness of the Dharma "medicine" they offer. Lest this period comes too soon, may we treasure and heed the Dharma!

The cure was in Neville's blood. Cornered by the dark-seekers, he chose to sacrifice himself to shield two survivors, to allow them to bring the cure to others. At this point, there seems to be some allusion to the idea that it could all be part of a convoluted divine plan, though it was merely the writer's plot! Is one person's blood enough for saving all of humanity? Perhaps, though the cure was not based on a single person's blood. It was the result of much bloodshed - of many humans, dark-seekers and animals - through many sacrifices. A perfectly divine plan to save the masses would surely not even require the dripping of a single drop of blood - be it willing or not. In fact, a flawless plan would not allow disaster in the first place.

In the light of a possibly impending bird-flu pandemic, that might break out to kill millions of humans, there is no better time to rethink about how we relate to animals. Animal diseases among livestock are often "nurtured" by human abuse or lack of concern, before they "jump" to human hosts. Already, millions of birds have been killed during intermittent bird-flu scares worldwide. The kindest thing we can do for both the birds and ourselves is to no longer demand for their flesh. In the interdependent web of life, to continually neglect the importance of animal welfare is to neglect human welfare too. Remember this - while there is a cure for the fictitious Krippen Virus, no cure for bird-flu has been found yet!

While sharing on being inspired by Bob Marley's music, Neville said, "He had this idea. It was kind of a virologist idea. He believed that you could cure racism and hate... literally cure it, by injecting music and love into people's lives. When he was scheduled to perform at a peace rally, a gunman came to his house and shot him down. Two days later, he walked out on that stage and sang. When they asked him why, he said, 'The people, who were trying to make this world worse are not taking a day off. How can I? Light up the darkness.'" Speciesism (prejudice against different sentient beings) ought to be cured too. Indeed, we need the viral effect of the ultimate cure - with the spiritual components of universal compassion and wisdom. This virus can surely "kill" all of humanity's true troubles!