Singapore -- The movie “Body #19” is a horror-mystery thriller that has one of the most unpredictable twists in the end of the tale possible. Yes, be warned - for spoilers are ahead... 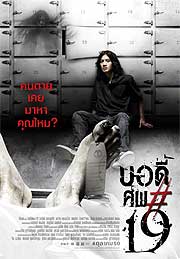 The protagonist realises that he is not the protagonist - when he wakes up to the reality that he had been living an illusion - due to severe split-personality delusion. He is not who he thought he was all along. He was not himself.

The audience is led to realise this too. His delusion and guilt for past misdeeds was so serious that he has ghastly supernatural experiences - some of which might only be natural manifestations of his suppressed conscience - his inner demons at play.

Now, the question to reflect upon is this - are you yourself? Surely not... for we have delusions too, since we are not enlightened yet, about who we really are, though probably not as severe as the protagonist's.

In fact, as long as we think we have a self to cling to, or that we are simply who we believe we already are... then we are already deluded.