The Bittersweet Revenge of "Sweeney Todd"

Singapore -- With most scenes shrouded in the shadowy darkness of hate, the movie version of "Sweeney Todd" is a story of both literal and figurative "black" humour. However, it does carry a grave message indeed - on the deep tragedy of vengeance - of the originally innocent upon the guilty, and of the guilty not repenting in time to the vengeful... before death reaps their lives. 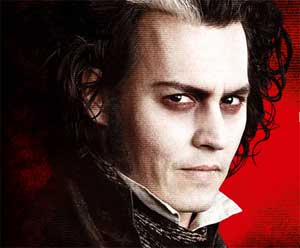 Sweeney Todd (played by Johnny Depp) runs a barber shop. It is what the Chinese would call a "black shop". It's really a "cut-throat" business, where he swiftly slits the throats of customers with his razor and rids them, while hoping to eventually lure his enemy as the next customer. The bodies are just as swiftly disposed - by becoming secret ingredients for hot-selling meat pies, for his business partner (played by Helen Bonham Carter).

His was a case of personal vengeance turned impersonal, as he kills almost randomly. Horrifically, his "trade" turns out to be a "family business" - when he kills his deranged and barely recognisable wife, before almost having killed his daughter. While he was out to seek dark justice for his wife, whom he assumed to had killed herself out of despair earlier, the sad truth is that if he did not embark on his killing spree in the first place, they could had reunited.

Revenge eventually turns bitter, though initially expected to be sweet. Other than during flashbacks of his happier past, Todd never smiles. As Stonepeace put it, "One who is always thinking of punishing others is always punishing oneself." With brimming hatred spilled over to the innocent, he was at heart tormenting himself too, when tormenting others, even if he was unmindful of it. A perpetrator of vengeance, he dies through vengeance of another too. What goes around enough comes around - it's karma!

In ancient China, there was a monk with the psychic power to discern the past causes of present effects in people's lives. One day, a rich man asked him to recite sutras at a wedding for blessings. Upon entering his house, he sighed and uttered:

How strange! How very strange indeed!
The grandson marries the grandmother.
The daughter is eating her mother's flesh.
The son is beating on a drum stretched with his father's skin.
Pigs and sheep are sitting on the couch.
The six kinds of relatives are cooking in the pots.
People have come to offer congratulations.
But I see that it is truly suffering!

In case you have yet to catch the irony of it, the grandmother was reborn as her grandson's wife-to-be, the mother as a pig, the father as a mule, the family's farm animals (pigs and sheep) as present relatives, while past relatives as pigs and sheep in the pots! Fantastical as it may seem, this story is a stark reminder to Buddhists that all have been one's kin at one point or another in the countless rounds of rebirth. Vegetarianism, or better still, veganism, are thus practices of universal filial piety - for not only do the killed have families, they are our extended cosmic family too!

The Buddha in the Lankavatara Sutra echoed the above thoughts to Mahamati Bodhisattva -  "Mahamati, in this long course of transmigration here, there is not one living being that, having assumed the form of a living being, has not been your mother, or father, or brother, or sister, or son, or daughter, or the one or the other, in various degrees of kinship; and when acquiring another form of life may live as a beast, as a domestic animal, as a bird, or as a womb-born, or as someone standing in some relationship to you; [this being so] how can the Bodhisattva-Mahasattva who desires to approach all living beings as if they were himself and to practise the Buddha-truths, eat the flesh of any living being that is of the same nature as himself?

... If, Mahamati, meat is not eaten by anybody for any reason, there will be no destroyer of life. [If there is no demand for meat, there will be no supply of meat by killing of animals to meet this demand.] Mahamati, in the majority of cases, the slaughtering of innocent living beings is done for pride [e.g. enjoyment via consumption and sports] and very rarely for other causes. Though nothing special may be said of eating the flesh of living creatures such as animals and birds, alas, Mahamati, that one addicted to the love of [meat-] taste should eat human flesh!" (See full chapter at http://www.moonpointer.com/bvf.php?itemid=385)

While it is perfectly "natural" that humans find the mere notion of eating human flesh revolting, one needs to reflect on why the eating of animal flesh is not equally disgusting too. And if it is indeed not felt as so, then why should the devouring of human meat be objectionable in the first place? Not that any meat-eating is being encouraged at all, this is indeed serious food for thought! And how different is the cutting of chickens' throat to drain their blood for chicken pies different from Todd's slashing of human throats for meat pies? Isn't the suffering entailed the same? The only difference is the amount of pain humans have inflicted on animals in history, which continues even as we speak!

A shocked boy stumbles upon the shredded remains of human victims, who made up his favourite pies. Perhaps, all meat-eaters should, as Stonepeace said, "See the killing to quell your temptations; not the killed [cooked and garnished] to spur your temptations... The sight of blood and gore [from violence done to animals in slaughterhouses] is good for only one thing - to prevent further blood and gore." The usually unseen horror, that is the secret origin of his meat, was finally discovered by the boy. This made me wonder... If we have psychic abilities like the monk in the story above, what would we see on our dinner plates? Can we stomach the truth? If not, why should we keep swallowing with greed and delusion?

See the six major reasons for vegetarianism -
Can You Further Convince Me to be Vegetarian?: http://www.moonpointer.com/vege/10.htm