What If You Were a "Jumper"?

Singapore -- What if you can teleport yourself to anywhere in an instant, simply by being mindful of your destination? Would it be a blessing or a curse? Well, the power to "jump space" is essentially neutral in itself. 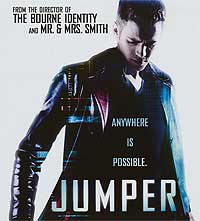 The presence or absence of your compassion and wisdom would respectively magnify the merits of your action or multiply your bad karma. As Spider-man's Uncle famously said, "With great power comes great responsibility." And with great actions, comes great karma!

In the Buddhist context, teleportation is simply for transportation, in turn for instruction! In the Mahaparinibbana Sutta, the Buddha was recorded to have mass-teleported a retinue of monks with himself across the river Ganges. He did so "as swiftly as a strong man might stretch out his flexed arm or flex it again"! Yet elsewhere, there is an account of the Buddha admonishing an ascetic who spent 25 years training for the ability to walk on water, saying it was a small gain, since a mere penny would easily ferry one across!

Is Buddhism ambivalent about psychic abilities? In the first case, the Buddha was being practical, as the river was short of vehicles. What's more, he used the opportunity to give a teaching, urging crossing to the "shore of liberation" via diligent Dharma practice - "When they want to cross the sea, the lake or pond, people make a bridge or raft. The wise have crossed already." The Buddha never displayed his powers for unworthy reasons. In the second case, the Buddha was emphasising the impracticality of focusing on developing supernormal powers while neglecting wisdom.

While psychic abilities can be developed intentionally without wisdom, they are also natural by-products of a spiritually developed mind. Having such powers without wisdom creates more harm than good - for one is liable to have conceit as a side effect, which is detrimental to furthering the path of developing wisdom. It is thus a big mistake to think that those who openly display psychic abilities must be wise ones, for what displayed is pride and very lack of wisdom. Thus, Buddhism censures against the indiscriminate display of these powers.

In "Jumper", David (played by Hayden Christensen) found it liberating to jump to wherever his heart desires, not realising that he could not jump to liberation itself. As a song (Love Comes Quickly) by Pet Shop Boys goes, "You can fly [jump in this case!] away to the end of the world, but where does it get you to?" Jumping motivated by greed and impatience for escapism might bring fleeting worldly happiness, but it brings no ultimate happiness. You can't jump all the time anyway. Flee as you might, you can never jump away from the fleeting moment that is now.

If True Happiness is not a place but a state of mind, we need to make a quantum leap to it through spiritual cultivation. This requires no psychic powers! Though most of us find it hard to jump straight to Nirvana in this lifetime, we can jump to an ideal place which leads to Nirvana - Pure Land - which is the safest refuge from Samsara. Likewise, to do so requires mindfulness of the destination (or rather, Amitabha Buddha). Once again, this leap is first made in the mind - by purifying it. We too are Jumpers from life to life, jumping from realm to realm by thought - for "The ten Dharma realms (all worlds) are not beyond a single thought."

Much as he tried, David could not jump away from karmic consequences and moral responsibility. He had repeatedly jumped to "borrow" money from the vaults of banks. In Buddhism, to take the property of another without permission is already stealing. Indulging in the high life with his ill-gotten wealth, he squandered away his merits while creating negative karma. His constant amassing of holiday kicks around the globe reminds us of the gods resting on their laurels, from which they fall in time.

Never satisfied from his gallivanting, David jumps on and on, in search of the elusive True Happiness - that must come from contentment and the growth of compassion and wisdom. His complacency towards disasters which he could help relieve (with his powers) revealed that he was no public or secret superhero at heart. If he wished to conceal his identity while helping, he could have simply put on a mask to be a costumed vigilante! Bodhisattvas do come in many skilful guises!

David was stalked by a fanatic Paladin (played by Samuel L. Jackson), who witchhunts Jumpers religiously, believing that "Only God should have the power to be at all places at all times." The scriptwriter probably forgot that though Jumpers can be at many places within a short span of time, they can only at one place at any one point in time. In contrast, Suddhipanthaka, who was the Buddha's disciple, had the power to manifest in multiple places at the same time, while all Buddhas are omnipresent as the universal Dharmakaya that pervades the space of the ten (all) directions.

Not that Buddhism subscribes to the belief in the existence of a creator God, but if no one ought to teleport, why did this God, if he exists, create those who can? And if anyone does teleports, why does this God not simply do something to cease it, since it is not meant to be? In other words, the Paladins were self-righteously playing God. However, some Jumpers might behave "godlessly" too, while others might not. While the Jumpers generally do not jump to help others, the Paladins generally jump after them (with the aid of a machine) to harm them. How ironic!

With the faulty ideal of extermination being above reformation, the mindless wrath of the Paladins towards the Jumpers in turn stirs the mindless anger of the Jumpers towards them, urging a Jumper (played by Jamie Bell) to crave killing them too. Suddenly, both Paladins and Jumpers become not very much different, as they jump at each other with the same defilements! Such is the harm and danger of discrimination on both sides. As the Buddha taught, "Hatred can never be ceased by hated; hatred can only be ceased by love [and via understanding]."

The antagonistic relationship between the Paladins and the Jumpers can be seen as an metaphor for various forms of discrimination of the different in our world - be it of race, religion or even species. This is reminiscent of the case of the most famous teleporter in popular culture - the mutant Nightcrawler of the X-Men. (See the "Nightcrawler Syndrome" at http://www.moonpointer.com/index.php?itemid=1929). Though he is a priest (thus being relatively "godly" in nature), he is nevertheless demonised, simply because he looks like a demon, and because he (dis)appears in a puff of smoke that smells of fire and brimstone!

David's mother (played by Diane Lane) chose to abandon him as a child upon discovering he was a Jumper. Not exactly out of lack of love though, but out of the lack of wisdom - as she was a Paladin. She jumped responsibility of being a true mother by not jumping out of her delusion. She did save his life though. However, some Paladins are so dogmatic about their blind beliefs that they go to the extent of implicating the loved ones of Jumpers in the bid to seek and destroy them. Surely, when a belief harms more than helps, something is terribly wrong. Faith in goodness must lead to goodness in thought, word and deed.

David proves to the violent Paladin hot at his heels that he is "different" from any other assumed wayward Jumper. In a desperate attempt to end his discrimination, he jumps him - not to a life-threatening location, but to a deserted but safe place, before personally jumping off in peace. The Paladin is left stunned... awakened we hope, by the power of David's magnanimity - his lack of vengefulness towards him. To the audience's pleasant surprise too, David was indeed different - in a good way. Will this Paladin be different too? Now, if you were a Jumper, where would you jump to? Would you be leaping deeper into suffering, or would you be leaping out of it?