Singapore -- According to the film, the unwritten "Rule #1" for the cops of the "Miscellaneous Affairs Department" (MAD) states that officially, "There are no ghosts." The tactfully named department is one which attempts to discreetly take care of reports of supernatural disturbances, that would classify as "X-files". 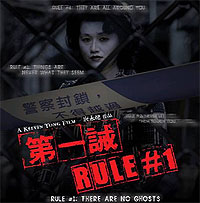 The rationale for Rule #1 seems fair. It assumes that if the authorities do not keep inexplicable cases under wraps, they would disrupt society. Just imagine the horror that would spread if the press publishes police statements about hauntings and possessions! Would society then, become rampant with panic and superstitions? Or would it awaken to the reality of the paranormal? It is hard to tell.

With the intention to disprove the existence of the supernatural to the public while continually bumping into them, the MAD detectives have a difficult job indeed - as they struggle to negotiate with the grey realm seemingly "between" life and death - where right and wrong seems more mysteriously grey too. And how do you arrest a spirit or make one obey human law?

Wandering spirits are those who have passed away, who cling to their former lives; they are different from "hungry ghosts", who were reborn with strong craving. Hungry ghosts are thus not wandering spirits, while the latter might be reborn as the first. From the movie poster... "Rule #2: Never let them touch you. Rule #3: Things are never what they seem. Rule #4: They are all around you." These "rules" are generally valid!

Depending on the individual's spiritual and physical strength, contact between the humans and spirits can be hazardous. In the story, spirits can only possess whoever touches those they already possess! When unrelentingly malevolent spirits possess to harm, the cops feel compelled to shoot to kill - so as to cease the spirit's possessing of more humans by touch.

Unfortunately, they end up killing the possessed persons too. According to Buddhism, just as spirits can travel at will without physical aids, spirits cannot be killed by physical means - including bullets! The truly troublesome spirits are thus truly tough to deal with. Thank goodness, just as there are relatively few troublemaking humans in the human realm, there are few troublemaking spirits in the unseen realm too!

The film suggested that once possessed, a human can never lead a normal life again - one becomes an empty and useless vegetative shell. Thank goodness again, this is not true. Unless one was severely disturbed, one can regain well-being. The notion of shooting to simultaneously "kill" a spirit and the human possessed is thus not a good one - as it perpetuates violence - for one might be further stirring the hatred of the original vengeful spirit, while probably "creating" a new vengeful spirit - from the human killed! Instead of "killing two birds with one stone", one aggravates two with one shot! The idea of killing both the guilty and innocent also presents a dilemma should one's loved ones be possessed!

The only way to break the vicious karmic circle of hate is to kill neither - by doing one's best to save both the spirit and the human possessed. As the Buddha put it, "Hatred can never be ceased by hatred. Hatred can only be ceased by love." A cop (played by Shawn Yue) did not realised that, while he wondered if he was more a cop or killer, a protector or destroyer. He had shot a serial killer, who returned to haunt him via possessing many others, "forcing" him to shoot them. Such is the virulent effect of unchecked hate, that can carry on from life to life. Whenever we are mindful of ourselves being "possessed" by hate, we should transform it with loving-kindness swiftly, and not pass it on! Thank goodness, yet again, for those who kill humans are usually karmically and promptly reborn in the hells upon death - not having "extra time" to wreck havoc.

Before carrying out any exorcism, it is always wise to first do one's best, with professional medical help, to discern if the affected person is psychologically or supernaturally disturbed, or both. While "exorcism" generally brings to mind the forceful expelling of evil spirits from possessed persons or haunted places, Buddhist "exorcism" does not aim to kill, trap, hurt, or vanquish harmful spirits. It is practised in the spirit of compassion, so as to persuade the being to cease any disturbances and to repent his/her ways, to transform the being positively by encouraging resolution of his/her attachment and hatred, and to guide the being towards spiritual liberation or a better rebirth.

There are many Buddhist methods of exorcism. First and foremost is the practice of meditating and radiating loving-kindness to the spirit to calm him/her down, to assure goodwill and willingness to understand, followed by physical or mental dialogue to clarify any matters (if possible) to aid their resolution. The offering of prayers and the doing of good in the name of the spirit can also be done, so as to help him/her create spiritual merits for his/her well-being. One can also encourage the spirit to faithfully chant the name of Amitabha Buddha (Amituofo) mindfully, so as to seek rebirth in his Pure Land, where peace and enlightenment is guaranteed.

Buddhist exorcism aims for win-win situations for the involved human and spirit - who are seen as two parties affected by negative karmic affinity, that requires peaceful resolution. The spirit is never demonised as downright evil, but is seen as a misguided being suffering from hatred, who thus needs our compassion and wise counselling. This is similar to trying to reform abusive human criminals.

However, for stubbornly unrepentant and violent spirits, there are special chants, which are protective scriptures (parittas) and mantras (and invocations of the names of Buddhas and Bodhisattvas) to keep the spirit at bay. For those unconfident, always seek the advice of qualified Buddhist masters! Remember - spiritual matters require spirituality, not mindless violence. Be one a human or spirit while interacting with any being, the Buddhist precept "Rule #1" is to abstain from killing!