Singapore -- They say "Imitation is the best flattery." Perhaps so. To that, I'll add that "Improvisation is the best tribute!" Due to hilarious and desperate circumstances in the story of "Be Kind Rewind", two friends (played by Jack Black and Mos Def) decide to make their own "sweded" versions of blockbuster hits like "Ghostbusters" and "Robocop" - so as to salvage the services of a VHS video rental shop. 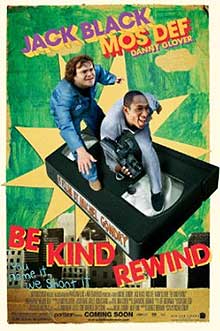 In their course of guerrilla filmmaking, the buddies go bumbling around with shabby makeshift props, half-witted scripts and ridiculous acting (which is of course mindful good acting here - if you know what I mean). It is said that the best comedians tell jokes with straight faces. This is probably why the film is a rip-roaring comedy - because we see the guys seriously trying to do it right - in an unwittingly funny way!

In a strange way, their efforts were touching - because they were so terribly sincere! The accidental brand of humour captured on film pleasantly surprises their customers... and suddenly, business has never been so good. A truth rings true here - that being genuinely sincere is more important than being the best. In terms of Karma, it is the original motivation that counts more than the action or result!

The revisited films might not be same as the genuine ones, yet they were genuinely refreshing in spirit. They were not even spoofs as much as they were rough personal tributes. Being recordings of both human strengths and foibles, they were moving in unexpected ways - becoming documentaries of sincerity more than flicks of comedies or tragedies. In a bid to save the shop from demolition for a newer building, the neighbourhood makes a black and white film on its historical value to share.

"Be Kind" rewinds the audience to a simpler and seemingly kinder period - when video tapes were used instead of DVDs, when friendly neighbourhoods were truly inhabited by friendly neighbours, when small shops were personal hangouts instead of overwhelmingly big and cold malls. More than a tribute to the magic of filmmaking, it is a poignant nostalgic tribute to precious heritage lost through change... and of the pain that comes from clinging to the fading too.