"The Orphanage" of "Absent" Children

Singapore -- In "The Orphanage" (El Orfanato), a mother (Laura, played by Belén Rueda) loses her adopted son Simón (played by Roger Príncep) in the orphanage she grew up in. Prior to that, he had befriended a mysterious unseen boy - Tomás (played by Óscar Casas). 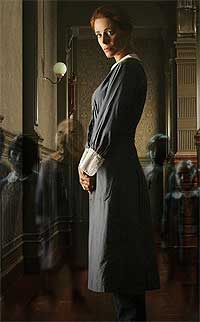 Assumed to be another imaginary friend created from his loneliness, not much attention was paid to him. Well, perhaps children create imaginary friends due to lack of attention in the first place. An important lesson indeed, for absent parents - who assume the other parent is always present.

It turns out that Tomas is indeed an invisible friend - a wandering spirit, who drowned unhappily in a freak "accident" many years ago when the tide came in. Born deformed, he was the unfortunate victim of an insensitive prank played by children of the orphanage, with whom the Laura grew up with. These children were later vengefully poisoned by Tomas' mother. As if truly orphaned for good, and unable to make peace with their unfortunate past to let it go, the children became alienated but restless spirits haunting the orphanage.

Though the Peter Pan myth has magical children who never grew up, the truth is that even wandering spirits of kids do not live forever. Rebirth resumes as long as liberation from the karmic cycle of birth and death is not attained. According to a psychic, the children were trapped in their misery of their sudden deaths, unable to untangle the knot that was their existential crisis - a wound that needed to be healed. Her remarks spurred Laura to believe that Simón's disappearance involved these spirits.

With the passing of time, it became increasingly torturous for Laura, who could no longer be certain whether Simón was still alive, and whether she should simply give up the search for him. How much parental attachment is considered "natural" and how much of it is considered unhealthy? Needing regular medication, she had concealed the truth from Simón that his health was in a precarious state. It would be ironic if Simón too died a "premature" death like the children, without understanding or accepting the fragility of mortality.

The ending of the story should prove bittersweet to the general audience, when Laura unwittingly joins the children in the afterlife as wandering spirits to live in the orphanage. She is however, willing to do this because the children were all her friends in need of love. Is this a "happily ever after"? It's a tragedy of attachment really, that will not lead to true lasting happiness - because unenlightened beings have different and constantly changing karma, that will eventually pull them apart, just as it happened to bring them together.

True love in Buddhism is not attachment in life till death and beyond does us apart. It is love that is able to graciously let the beloved go in peace, should they need to leave. Love sets free. This is not heartless, but being true to the reality of life and death. True love ensures peace of mind for the beloved who is passing away, or who has passed on, while creating and dedicating merits for their well-being in a future life. In the mean time, may all parents treasure their living children, just as children should treasure their living parents.