The Zen of "Kung Fu Panda"?

Singapore -- Po the Panda (voiced by Jack Black) is the perfect underdog - the roly-poly yet constantly hungry one, who seemed to be the exact misfit as the Dragon Warrior, who is prophesised to save a village from the wrath of Tai Lung the leopard (voiced by Ian McShane). While Po fantasised at length about being an almighty martial artist, his self-confidence wanes when he realises how far away he is in skill. 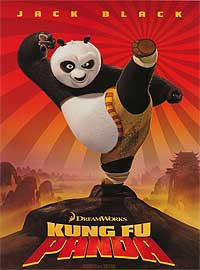 Nevertheless, Oogway the grandmaster tortoise (voiced by Randall Duk Kim) believes in his potential - just as he was sure that a peach seed could be nurtured into a peach tree, that a peach seed will transform into nothing but a peach tree - but only when supporting conditions are present. The focus on Po being the "chosen one" might remind Buddhists of how even the least likely of us have Buddha-nature!

However, Shifu the racoon (voiced by Dustin Hoffman), who was the chief disciple of Oogway, doubted Po's abilities initially, and was impatient at wanting to pluck the fruit before the seed was nurtured. Sometimes, we can only plant karmic seeds, nurture them and wait for fruition in good time! As Oogway says, "there are no accidents" - though the interplay of causes, conditions and effects takes time. Karma is not always as instant as we wish!

Po's plea to his master to "make me not me" is reminiscent of the Buddhist teaching of non-self - which paradoxically allows for "self"-transformation via personal efforts to grow in spiritual insight. Seeing Po's greed for food, Shifu uses his desires with desirable effects - by using his unending appetite as a means to motivate him to train hard and well. It's vaguely like the tantric concept of skilfully transforming gross desire into fine fuel for liberation!

Vying for the status of the Dragon Warrior, Tai Lung fights with Po for the Dragon Scroll. In truth, it was but an empty scroll, which reflects the face of the one who peers into it. This famed secret "recipe" for making one the Dragon Warrior was but a spiritual placebo, a Zen koan-like riddle. There is no secret ingredient that makes one the mightiest warrior - other than honest confidence and righteousness - which would be aligned with the truth.

Thus, Tai Lung had betrayed all that he had learnt from Shifu with his contention for the scroll, which was much ado about nothing. The honour that he assumed it promised was literally "empty" of any substantiality. That he realised nothing special from the scroll ironically proved that he did not deserve the honour it represented. As if a wordless sutra, the empty scroll interestingly becomes a good gauge to deter pride while subtly offering truth.

The empty scroll might remind some of the story of Sudhana, who goes on a quest for the absolute truth. After a long search, he meets Manjusri Bodhisattva, the personification of perfect wisdom - who points him to a tower atop a steep mountain. After a perilous ascent, Sudhana arrives at the tower - and realises it is empty! Could this imply that the journey of learning matters more than its end, while ultimate wisdom has no fixed forms?

Some other traces of Buddhist influences in the film include a scene of Crane (voiced by David Cross) being interrupted by Po while finishing a calligraphic piece of the word Zen in Chinese (Chan)! Oogway also utters thoughtfully that "Yesterday is history, tomorrow is a mystery, but today is a gift. That is why it is called the present." Perhaps it was inspired by the heart of the Bhaddekaratta Sutta (translated by Thich Nhat Hanh below), where the Buddha taught...

Do not pursue the past. Do not lose yourself in the future.
The past no longer is. The future has not yet come.
Looking deeply at life as it is in the very here and now,
the practitioner dwells in stability and freedom.
We must be diligent today. To wait until tomorrow is too late.
Death comes unexpectedly. How can we bargain with it?