Kuala Lumpur, Malaysia -- FEW media can convey the message of hope and love in a story to the masses as effectively as the big screen. 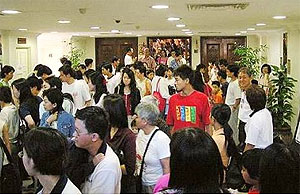 Hence, in an effort to promote greater public understanding of Buddhism values, the second edition of the Wesak International Film Festival (WIFF) 2008 will be held this weekend and on June 22 and 23 at the Malaysia Tourism Centre in Jalan Ampang, Kuala Lumpur.

Featuring 12 films, the festival will be presenting Buddhist-themed movies and documentaries to animation and children's films.

WIFF 08 organising committee member for publicity Wong Kin Yap said the objective of the festival was to offer the cinema as a vehicle to foster wider appreciation and better understanding of Buddhism among the public.

“Building on our success in 2006, 18 Buddhist organisations have come together this year to organise this second edition of the festival which showcases the best in films on Buddhism,” said Wong.

“It is also our aim to promote peace and harmony among people.”

Of the 12 films to be screened, three will be full-length movies, namely Angulimala from Thailand, Qi Xia Temple 1937 from China and Milarepa from Tibet.

Angulimala, which was produced in 2003, tells the story of the murderer of the same name who became a disciple of Buddha, according to Buddhist scriptures.

Meanwhile, Qi Xia Temple 1937 is about the 1,500-year-old monastery that became a hiding place for thousands of terrified civilians when the Japanese army invaded the Chinese capital of Nanking in December 1937.

The film documents the temple's abbot Ji Ran's extraordinary contribution in protecting his countrymen during the war, and the fearless spirit he displayed in saving those who were suffering.

The third movie, Milarepa, which tells the story of Tibet's most famous saint, was directed by Bhutanese Neten Chopling Rinpoche.

Other featured films are 10 Questions for the Dalai Lama, Peace is Every Step, Buddha's Lost Children, Lion's Roar, Amongst White Clouds, Refuge in the Three Jewels (Discovering Buddhism Series), Fearless Mountain, Oseam (animation), and Eyes of the Little Monk (animation).

Wong said on the festival's opening night tomorrow, there would be a special performance by famed Buddhist songwriter Ravenna Michalsen from the United States who would be singing hymns.

Admission to the festival is free.