All Hail the Holy "Hancock"?

Singapore -- There are heroes and villains... but some are in between. Hancock (played by Will Smith) is a superhero, who is seen as a supervillain too - when his attempts of saving the day wrecks havoc when he passes through - smashing up a train, crashing into a billboard, impaling a car... 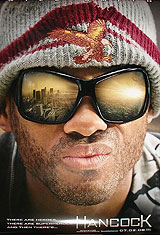 But we can't say he's really unmindful - for he does do his "job" voluntarily and gets things done - though he leaves quite a messy trail to clean up, garnering more curses than praise along the way. Being a bitter angry alcoholic bum didn't help his public image either. The problem with Hancock was being a semi-reluctant hero, thus being only semi-mindful about his vocation, feeling only semi-obligated to be helpful.

Things change when Hancock saves a PR man (played by Jason Bateman), who sees his worthiness and ends up changing the world through him - by helping Hancock to change for the better, who in turn makes the world a safer place. Indeed - who says we must save the world all by ourselves?

That would be heroic egoism at play. A skilful partnership can work wonders too. Instead of trying to urge reluctant giant corporations to commit to charity for his pet project of bettering the world, the PR guy does Hancock charity instead - with no strings attached - by cleaning up his image. This in turn inspires Hancock to change the world with new found healthy self-esteem.

Realising that it makes sense to wholeheartedly embrace his superpowers and put them into good use, Hancock "turns over a new leaf" and becomes a mindful "Bodhisattva" of sorts for the masses. He thereby becomes accepted as a genuine hero.

To his pleasant surprise, his acceptance and expression of his latent streaks of altruism makes him accepted by those he is altruistic to. When we become true to ourselves, we become true to the world too. This also applies to Bodhicitta. The altruistic intention to help others be free from suffering will link to action that relieves our own suffering as well. The key to perfect happiness lies in doing our best to bring happiness to those around us.

It gets a little mystical when the script hints that Hancock might be the "insurance policy of God" - an angel of sorts. It's more obvious that Hancock was someone struggling on the self-chosen Bodhisattva path personally - without divine assistance. The calling he answered was within his own heart, not from "heaven" above. If there is an almighty and good deity, wouldn't that deity be the ultimate "insurance policy"? Why then, is there the need for this deity to create struggling "insurance policies"? Shouldn't the ultimate create only the ultimate? Instead, we see Hancock's imperfections. Interestingly, if Hancock was too godlike, he would replace the idea of God. He can become a perfectly enlightened Buddha though!