Why So Serious about "The Dark Knight"?

Singapore -- If you think Batman stories are kiddy stuff, nothing could be further from the truth - especially so for "The Dark Knight", which is a gritty but compelling tale of moral ambiguity and the koan-like dilemmas it presents. 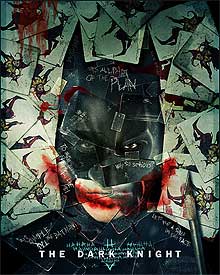 The leading criminals of Gotham have cowed further into the shadows - in fear of the swift and silent vigilante, while a more menacing criminal rises among them, calling for their unity to kill Batman (played by Christian Bale). But can there be true honour among thieves? Apparently not for the Joker - being a force of violent insanity.

While Batman is one of the most complex characters in comic book history, the Joker as presented poses a formidable match as an archenemy. Note that this is no superhero flick, since the protagonists have no special powers. Batman's altruistic endeavours are strongly driven by guilt of not being able to save his parents from crime when he was young. The Joker however, is nihilistically immoral and sadistic, seemingly void of conscience. One has too much guilt while the other lacks it! Karmically, both extreme attitudes can prove punishing.

The Joker creates a fix for Batman when he resolves to kill one person a day - till he discloses his masked identity. In this cunning move, he turns the tables around by making Batman look guilty. It's quite a fix indeed as Batman, being an outlaw (operating above the law), albeit to protect and serve, will be arrested should he surrender. His absence might render Gotham more criminally chaotic, but innocents are dying because of his refusal to surrender too. Of course, Batman does his best to save them and himself, and the Joker - from his madness!

The Joker devises a sick "social experiment" on morality by planting bombs on two ferries - one transporting criminals while the other lawful citizens. Each side is given the detonator of the bombs on the other ferry. He urges them to consider pressing the button before the other side does. His expectation of chaos goes "chaotic" though - when both sides decide not to press their buttons after much deliberation. Order is restored! Even the leader of the criminals threw away the detonator. The worst of situations often bring forth the best in us.

Though the Joker relishes in chaos, he is ironically not the personification of chaos. He desires order within his chaos too. Here lies what I call the Joker Paradox. He claims this - "I'm a dog chasing cars. I don't have plans. I just do things. I'm not a schemer." Despite this, we see his elaborately devious plans in action to wreck havoc. He wanted to prove "schemers", who control law and order, to be pathetic in their efforts. In the end, he proved himself to be the ultimately pathetic schemer when apprehended by Batman.

Batman's voluntary vocation is a largely thankless one - which makes it all the more truly altruistic. As the Joker put it, both of them are seen as freaks, even if one helps while the other harms. Batman chooses his serious and threatening style to strike fear in the guilty, while the Joker simply laughs away his "uptightness" and uprightness. Maybe even wrathful Bodhisattva manifestations might not work well for the severely deluded and unrepentant? If so, only self-awakening to their Buddha-nature can help. Arkham Asylum never really cured the criminally insane!

"Why so serious" about him, the Joker? Perhaps the brilliant actor (Heath Ledger) who played his role so seriously was the real personification of chaos - due to his heavily publicised sudden accidental death. Are matters of life and death tragically chaotic? The truth is, chaos can never be truly chaotic as it exists within the orderly. Within the apparent mess that is the universe, there must be the order of cause and effect - even if not readily discerned. If life, the universe and everything is pure chaos, life and death would be totally meaningless, pointless. We might as well become the Joker. Seriously! No joke!