Singapore -- In the comedy "Money No Enough 2", it speaks of Singaporean commoners complaining to one another about their grievances on money matters - high medical bills, road taxation and such. 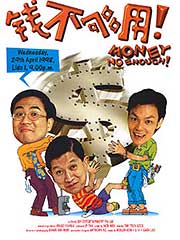 It also features a character complaining about the phenomenon of most people just complaining; without really acting upon their complaints - by ensuring that they are really heard, that actions are taken to rectify the situation.

Often, after the masses exhaust themselves from mere complaining, their grievances are somehow accepted and forgotten. But is this character not also just complaining? And is the film itself not an elaborate complaint? Or is it action too? In Dharma practice, our "thoughts, words and deeds" should ideally be one and maximised in improving ourselves and the world. None in this trio should be amiss.

What is true action? Is complaining a true or complete enough action? On the director's (Jack Neo) blog is a tagline - "Some choose apathy; some choose silence; I choose humour." Is joking and critisising about real life issues on the big screen action enough? Is it the Middle Path? Is it real action for bettering the world? Or does our Middle Path change in time, as according to changes in circumstances? Even if we are not already walking on the Middle Path, we should walk towards walking on it.

Dependent on the director's current abilities and constraints, it's hard to qualify or quantify the worth of the film clearly. Does the film inspire action indirectly, or does it inspire inaction directly, as we simply laugh our woes away? Interestingly, being able to laugh at our grievances does help to alleviate them somewhat in the moment! Well, you can't feel sad and happy at the same time - even though it might seem bittersweet on hindsight. (MNE 2 also illustrates the importance of filial piety.)