Another One of "The Clone Wars"?

Singapore -- One of the main reasons why the Star Wars universe continues to intrigue fans is its mix of "East meets West", of how ancient spirituality marries modern technology. 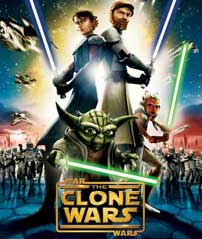 This is perhaps best exemplified by the juxtaposed use of ruthlessly "efficient" laser guns with "honourable" swords. Yes, light sabres are really simply swords - which are retractable and illuminable!

It has long bugged me as to why while other highly advanced weaponry is showcased in Star Wars, no one - not even the baddies, cheat by designing and wielding longer and broader light sabers for the element of surprise in attack. Could it be that even they honour 'honour" itself, that even they value fairness in swordfight, despite their devious schemes?

Despite the wider creative flexibility of animation as a means to tell a story, the titled clones are largely the same in spirit, as in the Star Wars movie episodes. Though armed and seemingly well-designed for battle, these foot soldiers trudge along rather mindlessly, with no individualistic character. With a robotic herd mentality, they don't seem to learn much.

In comparison, the rebellious human and alien characters are much more interesting. In fact, it is by not being ones of the crowd that they are able to win their battles in skilful ways. Likewise, the Buddha broke free of habitual samsaric thought paradigms to realise enlightenment. Although you can't clone the Buddha's mind, you can become a Buddha!

"The Clone Wars" are of course fought largely by clones. The only way these wars differ would be as directed by the non-clones commanding them. It struck me that there could be another meaning to the term "clone wars". Wars themselves are always clones of one another, initiated and fought from the same timeless roots of evil - greed, hatred and delusion - albeit in many different ways.

If you are still unaware, the Star Wars universe is filled with Buddhist inspirations. The new padawan, for example, is called Ashoka - probably inspired by the name of the great Buddhist King Asoka. Here's more… George Lucas, the creator of Star Wars, once called himself a "Methodist Buddhist", while the zenny Yoda was physically modelled after a Buddhist master, while the celibate robed Jedis live in temples…

For more intriguing parallels between the Star Wars universe and Buddhism, learn the "Intergalactic Dharma" at http://www.buddhistchannel.tv/index.php?id=12,1249,0,0,1,0 !