Lying in "The Coffin" to Contemplate Death?

Singapore -- According to the movie "The Coffin", there is a bizarre Thai ritual where believers think death can be cheated (thus prolonging life) by lying in a coffin before their actual deaths, while chanting is done for them. "Bad karma" can be dissipated too. 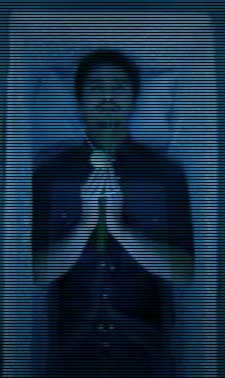 Used interchangeably but inaccurately, "bad luck" is also included. Well, the cause and effect of karma is not based on random luck, which does not exists in the Buddhist teachings. And death is not some "reaper" who can be easily bluffed. Some ritual participants claim to feel relieved and even reborn. A psychological effect perhaps? If we are to imagine we have passed away, while lying still during a solemn mass "funeral", there would be the tendency to feel renewed upon re-emergence. Mindful reflective listening to chanting does wonders too.

A recent report (http://buddhistchannel.tv/index.php?id=52,7190,0,0,1,0) mentioned that "Buddhism in Thailand can take strange forms, embracing animist superstition, magical practices - and the entrepreneurial spirit of many senior monks. Many Thais say that the true spirit of Buddhism is being lost." If this new ritual taps on greed for quick fixes and the fear of death, it's unskilful. In the film at least, the ritual never encouraged the creation of good karma as the right means of diluting the ill effects of bad karma. It is illogical that playing dead will eradicate all present bad karma - especially since remnant karma is a burden (or blessing) that is carried over to the next life anyway. The true way to completely "cheat death" once and for all is to realise deathlessness - Nirvana - which is what the Buddha did!

To attain the bliss and ultimate truth of Nirvana, which transcends the cycle of birth and death, there is ironically the need to accept and contemplate the conventional truth of death. Death is like a great mirror, in which we reflect and see the value of our lives, which motivates us to focus on the urgent issue of progress towards Nirvana, instead of merely escaping from bleak realities - such as the fruition of bad karma and death. The coffin ritual could be modified to be a meditation process, for contemplation on mortality. There is already a long Thai Buddhist tradition of monastics contemplating impermanence by meditating on the stages of decay in corpses, while the coffin ritual seems to advocate clinging to life. It is this clinging though, that perpetuates rebirth and the suffering it entails.

If Buddhists truly fear death, they ought to liberate themselves from not just death in this lifetime, but rebirths and "redeaths" too. It is more skilful to cultivate the fearlessness of death after accepting death, than to fear death itself. How many times can death be cheated anyway, if possible? Mara, "the evil one" in Buddhism also personifies death. Thus, to conquer death, we need to conquer our inner Mara - our defilements of greed, hate and delusion, the very culprits who bind us the the wheel of Samsara. The film highlighted the concept of transferring bad karma to another. Not that it's possible, doing so would create much more bad karma! Any apparent "truth" of transference of bad karma is the "recipient's" bad karma ripening at the same time as karma is always personally created and borne.

One of the protagonists participated in the coffin ritual as a desperate bid to rid her cancer. Upon realisation that her "miraculous" remission necessitated the death of her fiance and being haunted by him, she realises and repents for her mistake, and has a relapse. She re-embraces her illness graciously and remarks that she doesn't wish to interrupt the wheel (of cause and effect) that is spinning anymore - which is what she did earlier by trying to cheat death without knowing the cost. Sounds a tad fatalistic and pessimistic indeed - as the point of Dharma practice is really to interrupt the wheel - by realising how it works, so as to step out of it. That's liberation.

The story also hints of the horror of being buried alive. Would the darkness not be claustrophobic? Of course, for most. But if there's no exit, the wisest thing to do would be to meditate - to have your final practice session before your actual inevitable passing! Incidentally, the ritual involves facing West. Though Thailand is a Theravada country, could this be linked to aspiration for birth in Amitabha Buddha's Western Pure Land? There, life is immeasurable due to the environment's continual urge to create pure karma, while providing the ideal conditions for progress towards Buddhahood. Now that's a wonderful Mahayana skilful means to cheat death!