Forgotten Truths in a "Body of Lies"

I and the public know
What all schoolchildren learn,
Those to whom evil is done
Do evil in return. 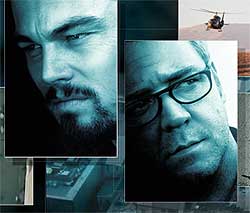 Some believe that was about Germany's humiliation in a post World War I world, that somehow later led to World War II via the rise of Hitler. But obviously, the film is about a post "September 11, 2001" world, in terms of the "World's War"… against terrorism – in and out of the Middle East. The movie tagline says - "Trust no one. Deceive everyone." Isn't this potent mix of suspicion and deceit in espionage for "security" another possible form of terrorism? As the story progresses, it becomes less and less clear as to who are the real terrorists – those who did evil in the first place, or those who attempt to stamp them out by doing more evil.

Do two wrongs, with one on each side, make things right? Or do they simply neutralise each other? Now, if only the world was that simple. While it is relatively easier to apprehend the chief perpetrators of hate (okay, it can be rather difficult too), their followers' resentment and penchant for vengeance is not easily placated. It is thus incredibly naïve to imagine evil can be instantly vanquished by arresting or executing evil-doers. The Buddhist but universal solution for the vanquishing hate is "simple" enough, though challenging in action. It is as encapsulated in this quote by the Buddha (in the Dhammapada):

Yes, this espouses the exact opposite of the unenlightened instinct to retaliate, as in Auden's poem. You must have heard it before – "An eye for an eye leaves the whole world blind." Hatred is itself evil. To attempt to use evil to end evil compounds the problem, not unlike how a "random" streetside bombing sends reverberations of hatred in many directions, creating potential for rebound. But is it practical, one might wonder, to literally love the enemy? First, we need to dissolve the notion of enmity. Other than the transformation of violent minds, there is no other way to end war. The real war to be "fought" is against the root of war itself – hatred - including the victims'.

Without a holier than thou attitude, extremists should be seen as deserving of empathy too – for they are too victims - of their delusions. Genuine understanding will soften hardened hearts. As the Nobel Peace Prize laureate, the Dalai Lama put it, "Wars arise from a failure to understand one another's humanness. Instead of summit meetings, why not have families meet for a picnic and get to know each other while the children play together?" There is no quick super-bomb that can end the war against terrorists or "infidels". The mutual bombardment is already giving one another hell. Who is heaven bound?

If one's "religious" ideals are truly so crucial to be spread, they should be done amicably, not by "blasting" shrapnel into the faces of non-believers. "If 'God' wills it" anyway, there would be absolutely no need to play "God" to hasten deaths. Just as "God-created" natural disasters can kill many swiftly without apparent reason, there is no need to meticulously plan bombings. Extremists slide along the scale with the extremes of fatalism and activism, believing that it is "fated" that "God" endorses their terrorism – while they are the ones who actively choose their course of action, while "God" remains deafeningly silent despite the bombings. But surely, if this "God" exists, he would prefer "infidels" to be "saved", not killed.

There is nothing else that gives "God" a worse name than terrorism in the name of "God" – leading some to remark that "God" is the "most dangerous idea in the world". Just look at the astronomical numbers who have died in history for their god(s), who were killed for not believing in specific god(s). Does "God" really bless America in terms of the war against those who believe Americans to be "godless"? More have perished in the US-Iraq war than those in the 9/11 tragedy. This is bitter irony indeed. Do we need anything more drastic to urge us to stop fighting one another? Let's hope not.