The Ponyo Paradox of Change & Acceptance

Dharma Inspired movie review: http://www.imdb.com/title/tt0876563/Singapore -- The Japanese animation feature 'Ponyo on the Cliff by the Sea' is a creative 'retelling' of 'The Little Mermaid' minus the tragedy of loss. It is largely an uplifting story on the universal themes of love, sacrifice, acceptance and change. 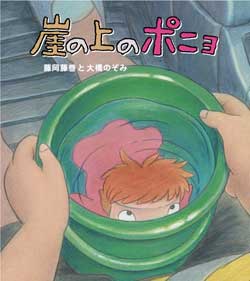 The boy Sosuke rescues Ponyo, a small mermaid of sorts, though he doesn't release her back into the sea immediately, which hints of childish infatuation with a new-found pet. Questions of whether domestication is the saving or trapping of animals comes to mind. Is domestication the path of natural or forced evolution? Does the security of a 'prison' protect or harm? Does love necessarily set the beloved free?

The issue of pollution runs as a background theme in the film. Ponyo was first trapped when she got stuck in a jar, while a ship was dredging the seabed for heaps of rubbish. Her father comments that humans' very breath is poison, that they have robbed the sea of life, that interaction with humans taints their genes. While he represents the strict conservative parent, he is also an ocean conservationist, who warns against the ills of humans. However, the line he drew between ocean and human life is one that is too long and broad. His wife, a sea goddess, is the more liberal and understanding one, who mediates to reconcile conflict instead.

A supposedly superstitious old lady expresses shock when she sees the human-faced Ponyo in a pail, exclaiming that the 'fish' is a harbinger of bad luck, a probable omen of an oncoming tsunami. An interesting thought came to mind - what if all ocean lifeforms have human faces? Would Japanese, whom in general love seafood so much hesitate to eat them? Would there be more 'positive' fear of enraging the forces of nature? Incidentally, all the major fishing seas in the world are already over-fished, on the verge of, if not already, in environmental collapse. (Later, Ponyo's second departure from the sea does cause a near-tsunami of sorts.)

Ponyo has a number of positive traits. She can heal, though she does it only once, and upsize stuff. Being the titular character, she's 'designed' to be cutesy, cheery, generous and innocent. Then again, it's hard to qualify innocence as a definite positive trait; it's more of a neutral one, as she literally caused a dangerous storm due to her reckless attachment to Sosuke. Ponyo has a number of negative traits too. She is fussy over food, throws tantrums, hyperactive and causes needless worry for her parents. Sosoke on the other hand, seems more lovable, though Ponyo easily steals the show with her antics. Sosuke is sensible, responsible, protective and conciliatory between his parents. In this sense, he is Ponyo's opposite. Hmmm… If we love someone for seemingly complementary qualities missing in ourselves, do we really love more of ourselves or the other?

It's easy to see why Ponyo loves Sosuke - for his selfless compassion, for being her 'personal Bodhisattva' (though true Bodhisattvas have universal compassion), even if in a kiddy way, while it is more of a mystery why Sosuke loves Ponyo. It is portrayed such that he doesn't seem totally sure either. Does Sosuke love Ponyo as a pet or a person? Or both, or as one who can transform to-and-fro from one to the other? Or does he love the changes themselves? What kind of love is his? Is it protective brotherly love for a little sister? Is it the love of friendship? Is it romantic love? (But aren't they too young to be lovers?) Is it purely altruistic spiritual love? Or perhaps it's purposely portrayed as a jumbled and open-ended mix of all the above - as in the case of the kind of shapeshifting love we have at times?

The ultimatum that Sosuke and Ponyo faced was that if Sosuke accepts her as she is out of True Love, she would transform into a human girl forever, while losing her powers. It's a test of the ability to sacrifice out of love too. If Sosuke's love wasn't true, she would turn to foam. (Of course, in real life, it isn't so straightforward or risky to prove love!) If Ponyo was a Bodhisattva with True Love for all, would she relinquish her healing power just to be with one person? Would it not be 'selfish'? Then again, she has no obligations to sacrifice for all if she isn't ready, while her willingness to risk love for Sosuke might be part of her path towards cultivating Bodhisattva love.

There's an intriguing paradox here… Sosuke was challenged to accept Ponyo as she is - a mermaid. However, if he did, she would become a non-mermaid (a human)! How then, is he supposed to accept her as a mermaid, without accepting her as a non-mermaid too? And don't all people (other than the fully enlightened) constantly change? If so, how can we really accept 'one' unchanging person for all time?

The truth is, the test of True Love is in the ability to accept not just the beloved as they are in the moment, but who they might change to be in time to come - for better or worse. If we are able to love despite changes in the beloved, would that not make us more likely to unconditionally love every being, since everyone changes as well? This is probably how our limited love can evolve to be the immeasurable love (loving-kindness, compassion, rejoice and equanimity) that Bodhisattvas have for all!
TOP