From 'Chandni Chowk To China', Delusion to Realisation

Dharma Inspired movie review: http://www.cc2c-thefilm.com/Singapore -- In the first Bollywood-Hollywood action-comedy 'Chandni Chowk To China', an Indian cook (Sidhu) who was disgruntled by his humdrum life sought hope in the possibility that he might have had an remarkable previous life, one which he would be able to magically relive, to chase his existential blues away. He visits one fortune-teller after another, none of whom gave him the good news he expected. 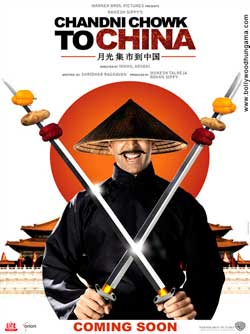 Just when his father reminded him that destiny was not in the lines of his hand, but in the hard work he does confidently with his hands, he stumbles upon a potato that very vaguely resembled a god he believed in. Placing his hopes upon his 'holy' potato, he continues to pray for a miracle.

A Buddhist master once commented that even if one believes in palmistry, the forces of change, as according to what one presently does or neglects to do has the karmic power to alter any 'preset map' of destiny. He even said that the fortunes of great spiritual practitioners cannot be accurately foretold - due to the astounding ways they keep altering their probable 'futures' with the creation of immeasurably great positive karma. If one believes that the lines on one's palms chart destiny, that they can change in time, these changes simply cannot keep up with the speed at which good practitioners keep altering their destinies for the better!

The scenes portraying Sidhu's pointless attachment to his 'potato god', which draws a crowd of willing believers are hilarious, hinting of how many seem to misplace their faith in arbitrary or even imaginary gods. In the movie 'A Better Tomorrow', there is a scene where the hero exclaims that he believes in God, that one who is able to control one's own destiny is God. A rather good definition I would say. Like it or not, as a believer of a God or many gods or not, we have no choice but to play God in our lives, for our lives. Sidhu's father reminds him that God only helps those who help themselves, which further suggests how arbitrary our faith in others can be without healthy self-confidence and personal efforts.

Also of arbitrary importance is one's identity in one's previous lives - since one is no longer totally the same as that person. In Tibetan (Vajrayana) Buddhism, even young children recognised to be the incarnations of well-accomplished masters (Tulkus) have to undergo complete and systematic (re-)education to swiftly refresh their memories of the Dharma teachings learnt in the past! Without doing so, devotees (or even the Tulkus themselves) might not be sufficiently confident of their spiritual prowess. Incidentally, throughout the film, there are scenes with Buddha images in the background as 'extras', smiling in a calm or perhaps even amused manner!

Sidhu was thought to be the incarnation of a great Chinese hero who once saved a village, and was invited to 'return', to save it from a tyrannical gang that came to terrorise it. After a string of misadventures, Sidhu realises that he was no great hero - unless he chose to be one and worked hard it, that it didn't really matter if he was a mosquito or a hero in the past. What mattered was to conscientiously do the right thing in the here and now. So truly arbitrary was Sidhu's previous life that there was no conclusion as to whether he really was a great hero in the past. That crucial was that he became a true hero in his present life!

Sidhu's martial arts master taught him a 'Shaolin saying' - 'Fear not a thousand moves practised once; fear one move practised a thousand times.' That single invincible unmatchable Kung Fu technique would be a well-trained skill that is properly harnessed. On this, Sidhu has a sudden realisation while fighting the key antagonist, that his unique Kung Fu was in the deft moves he utilised day in and day out as a cook - that have become his second nature.

Anyway, 'Kung Fu' is a generic Chinese term for any well mastered skill - including culinary skills! Where's the Dharma lesson in this? If we are to practise the Dharma well in this lifetime, chances are, we will be able to practise it better in the next, if we are not yet liberated. With adequate practice that makes perfect, our spirituality in terms of compassion and wisdom will render us invincible when our Buddha-nature is realised not just as our second nature, but our first and foremost original nature!
TOP