The 'Twilight' or Dawn of Desire?

Singapore -- What if you have the power of great strength and speed, and are able to remain ever youthful? Sounds like invincible eternal life? Not really, as the vampires in the movie 'Twilight', like others, can die too - especially when slayed by other equally powerful vampires. 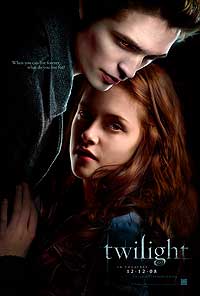 What literally sucks about being a vampire is that you need blood to survive. The film doesn't clearly depict that Edward, the teenage vampire protagonist, sees his raison d'etre to be.

Apparently, he has gone to school so many times that he made a huge 'artwork' with his numerous graduation caps in jest. Does repeated schooling make him wiser? With a wider perspective of history, shouldn't it make him much more enlightened? Looks like he missed Dharma education! The vampires in this story don't need sleep too. Imagine the amount of time on hand! Why not simply enlighten oneself and help enlighten others best one can? There's simply no nobler cause.

It is an unwritten rule for the vampires that they try to stay clear of the affairs of humans - lest their identities get disclosed. For the survival of their kind, they would even hesitate to save a human in need. Now, what is the point of living entirely for your own kind? With such great power at stake, it's no wonder that some vampires fight one another. Seems like a perpetual demonic-bestial Asura-like existence. (Asuras are demi-gods who battle among themselves and with the gods for greater power.)

However, while typical vampires relish human blood attained by murder, Edward's family is what he erroneously calls 'vegetarian' - because they only drink animal blood. Trick question - are such vampires more 'humanitarian'? Is being humane limited to humans? Or is the real test of humanitarianism how anyone relates to those weaker than themselves?

Edward's clan run into conflict with another band of vampires, who are ruthless in their killing of humans, leading to a chase where they try to run from while hunting the other. This kind of reminds me of the frequent high tension between the activist causes of pro-vegetarians and pro-meat-eaters!

The stance of the first is that meat isn't necessary for food, while the latter believes its their unquestionable birthright, that animals are meant to be food. With a strong sense of what is right and what isn't, Edward and company is forced to kill one of the wayward vampires who threaten to harm Bella (Edward's human love interest), which would bring more needless attention to the discreet vampires, harming their reputation while endangering them. This is reminiscent of the X-Men impartially subduing fellow mutants in the Brotherhood of Evil Mutants!

Edward has the power to read minds, saying that money and sex are the items on most people's minds. Look like he forgot to read his own mind deeply enough. He could not understand his attraction to Bella, how he never had much human bloodlust till he met her. Seems like a subtle imagery of the marriage of sex and violence here. However, Edward maintains his abstinence from taking her blood, while claiming he does not have the strength to stay away from her. While Edward keeps his temptations in check, Bella would rather he give in to his. This almost seems like a cheeky message on understanding the desires that drive teenage sex, while urging abstention!

Some say life has value only because there is death. Not always true - though impending death does make us treasure our lives more. Essentially, no one really dies (or is born) since there is rebirth - but life has to be lived in the here and now. Bella laments that she is 'dying already', from moment to moment, hinting of her anguish of impermanence. He replies that that's the way it's supposed to be. If so, why is he defying the universal law of impermanence?

Then again, as in the opening paragraph, vampires don't really live forever - if they are real! Bella craves eternal love and asks to be turned into a vampire by him. Edward asks, 'Is it not enough just to have a long and happy life together?' As long as unenlightened, what guarantee is there that eternal life with the beloved will result in eternal happiness?

An 'eternal' love-hate relationship might persist instead! While Edward seems able to cope with the impermanence of his lover, Bella could not cope with the transience of hers. I guess such are the makings of intriguing love stories, that draw legions of fans, with their heavily samsaric dilemmas.
TOP