Kuala Lumpur, Malaysia -- IN this age of the Internet, printed literature may not be as effective as multimedia in reaching out to the young. 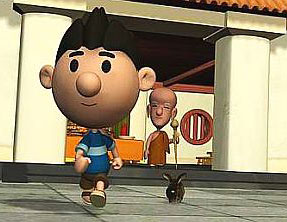 << The Abbot & The Orphan is the story of an orphan named Butterfly who is raised by a blind abbot.

That is why Ng Lid Sine, 47, has come up with a cartoon series, The Abbot & The Orphan, to capture the interest of children and teach them moral lessons along the way.

Ng has come up with a cartoon series, The Abbot & The Orphan, to capture the interest of the young and teach them moral lessons along the way.

“Children today are so privileged. They have everything, so they may find it difficult to grasp the dhamma (Buddhist teachings). I want to share with them the story of a child who has nothing, not even parents,” says Ng, who wrote the script for the series, inspired by his observations around the Buddhist Maha Vihara in Brickfields, Kuala Lumpur.

The Abbot & The Orphan revolves around an orphan named Butterfly (featuring the voice of Ng Zen Ian) who has nothing. He is cared for by a blind and old abbot (voiced by Vijaya Samaravickrama).

“The characters of the abbot and the orphan are a reflection of the unsatisfactory nature of life. The whole drama becomes a stage to display and unfold Buddha’s teachings,” explains Ng, who is animation director of Cartoon Workshop, a Selangor-based local production house for animated and educational series.

The Abbot & The Orphan – The Shrine, Episode 1 in English and Mandarin was recently released on DVD in conjunction with the 80th anniversary of the Buddhist Institute Sunday Dhamma School (BISDS) housed in the Buddhist Maha Vihara.

The school was set up in 1929 by the Sasana Abhiwurdhi Wardhana Society. The oldest Buddhist Sunday School in the country, it has over 1,300 students (aged six to 20) and 200 volunteer teachers and staff.

Vandana, a collection of Buddhist recitals in Pali during the puja (offering) ceremony, was also launched. This DVD includes Karaniya Metta Sutta, the discourse on loving-kindness recited by Buddhist monks to bless devotees. Both DVDs are produced by Cartoon Workshop and BISDS.

Heng, a volunteer teacher at BISDS, says: “Some 4,000 copies of Vandana and The Abbot & The Orphan have been produced with donations from sponsors. The second DVD,

The Abbot & The Orphan – Belief, Episode 2, is in the post-production stage and scheduled for release by middle of the year.

“In this episode, Butterfly is tricked by a fortune-teller who gave him two magic stones in exchange for goats. The storyline is aimed at instilling awareness that one should not believe blindly but investigate the truth.”

heng adds that there are plans to host the animation series on the BISDS website (www.bisds.org) to make it easily available to the Buddhist community.

The animation project also nurtures the creative talents of the Sunday school attendees, especially the children.

Vineeta Serisena, deputy principal of BISDS and animation series consultant, says: “The animation series is appealing, yet simple enough for children to understand. It has a deeper meaning within.”

To coincide with the BISDS anniversary and to commemorate the 90th birthday anniversary of the late Ven K. Sri Dhammananda on March 18, CDs containing dhamma talks by Dhammanand were launched.

Dhammananda had given 5,600 dhamma talks locally and abroad. Those interested in sponsoring The Abbot & The Orphan series can contact 03-2274 1141.