Bittersweet 'School Days with a Pig'

Singapore -- The award-winning movie ‘School Days with a Pig’ tells of a teacher’s special project for his class of grade 6 students to learn more deeply about the connection between life and food - by raising a piglet together, before eventually eating it. 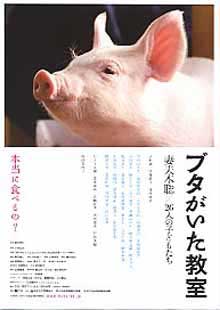 This premise is actually rather disturbing (though there is not a single gory scene) as it’s quite bizarre that both the teacher and 28 students were agreeable to the conclusion of the project in the first place. It’s easy to assume the film to be a cutesy comedy with piggy misadventures, but the ending is such that it becomes a ‘horror’ movie - albeit not readily depicted. As expected, the class splits into two factions as the story progresses.

One side feels that pigs are to be eaten, and since humans need food anyway, while the other feels that it lacks compassion. What missed dwelling into was the fact that humans don’t really require any animal produce to survive. It’s out of ignorance and greed that meat-eating is perpetuated. Throughout most of the show, the teacher doesn’t educate on the possibility of taking up a kinder diet (vegetarianism or veganism), and remains mostly neutral and ambivalent, letting the class debate on the future of the pig.

Naturally, the pig gets named (P-chan) by the kids, which some felt to be a mistake - because it meant bonding with him, making the prospect of departure harder. Even the ones who were initially pro-eating him became attached to some degree. Some start questioning why P-chan must be eaten - especially since he became not just like a classmate, but a pet and friend too.

This reminds us of a famous quote by George Bernard Shaw - ‘Animals are my friends… and I don’t eat my friends.’ In fact, the Buddha even encouraged us to befriend all sentient beings with loving-kindness (Metta), and to practise harmlessness. The issue of hypocrisy arose too… Why would it be okay to eat other living beings if it’s not okay to eat P-chan? Is it just because they became attached to P-chan? But must attachment be a requisite for universal kindness to function? Not at all. The teacher didn’t want to use a chicken because he felt it would be ‘too easy’.

He wanted the kids to learn to care for an animal well, to maximise the lessons learnt. The kids learn to nurture P-chan, play with him, feed him and defend him. They even built a house for him, clearing his poop and pee, and he becomes the jolly mascot of the school.

The more the bonding deepens, the more disturbing it becomes as the date for the kids’ graduation looms closer. For what is their kindness to him ultimately for, when P-chan is to be sent to the slaughterhouse? Does the bad faith not intensify?

As the kids became preoccupied with P-chan, even eating less to save leftovers for P-chan, some parents wondered if they attend school to learn or to raise a pig. That’s short-sighted of course, because raising a pig offers opportunities to learn about priceless lessons such as unconditional love and responsibility to a fellow sentient being.

The film consists of many one-line debating points on the ethics of eating P-chan versus not. Here are some… One says that since the project’s conclusion was to eat P-chan, they should do just that, as a matter of principle. But isn’t sticking to principles rigidly and needlessly itself a poor principle in practice? Is raising an animal to eat cruel, or is it the eating itself that is so? What’s the difference between creating a supply for meat and sustaining a demand for meat? In the Lankavatara Sutra, the irrefutable economics of the interdependence of the meat-seller (killer) and meat-buyer (eater) is stated - a cycle of violence that one can opt out of.

Pigs, and any other animals, don’t exist just to be killed and eaten by others, just as humans don’t. Humans are the ones who decide how to relate to weaker beings. When we choose the easy way out for our convenience and greed, we are really spiritually weak beings, truly incapable of caring for other beings. If so, humans shouldn’t domesticate animals in the first place to exploit them. '

We don’t need to eat animals to stay alive, while animals need us not to eat them to stay alive. Since there was domestication of P-chan with no way to return him to the wild, the kids ought to care for him throughout his natural lifespan. Someone remarked that P-chan already lived a full life of six months, but to measure lifespan unnaturally by the yardstick of slaughterhouses is as twisted as it is to let someone determine you own lifespan.

Another kid rationalised that after P-chan is killed, he would just be meat, no longer P-chan. This is unsound logic, because one still kills P-chan as P-chan. Yet another rationalised that killing and eating is entirely not related, that eating inherits the life of the eaten to let them be part of us. If so, why are we not eating our beloved family and friends when they pass away?

The matter of discrimination arose a few times. Isn’t it clearly favourtism to fight for P-chan’s life, while eating other pigs? Isn’t it clearly speciesim to not eat P-chan, while eating other animals? A cook saw pigs as monsters, who are nevertheless ‘delicious’ when cooked well (with vegetarian seasonings actually). But isn’t the one who demonises and exploits animals the real monster? The kids mistakenly assume that pig farmers love pigs like pets, that they too feel attachment to them before they get killed. If the attachment is so real, why let them be killed… continuously in countless numbers? They have probably gotten numb to the suffering of the pigs.

A child feels that if they are responsible for P-chan’s uncertain future, they should eat him. This would save others the heartache of probably ‘needing’ to send him to the slaugherhouse later. This was accused as being heartless by another. The class hoped to handover P-chan to juniors to care for him as there was no farm which wanted to adopt him for life. Should P-chan be killed simply due to their lack of time to care for him? A class of grade 3 students volunteer to take over, but were deemed too small and young. But couldn’t they be taught how to care for them as a team with more guiding teachers? Isn’t it better to learn to respect life from young?

The ending of the story is a distasteful one. The class cast equal votes for letting P-chan be adopted by the grade 3 students versus sending P-chan to a ‘meat-centre’, which is really euphemism for a bloodily merciless slaughterhouse. The teacher was forced to take a side by casting the deciding vote. He chose the latter, because he felt that the kids were already overburdened by the whole issue. This is bad decision because he chose the easy way out for everyone - by sacrificing P-chan. He was just selfishly ridding self-chosen human misery by subjecting an animal to ultimate misery.

It also hinted that all domesticated animals should die and be eaten in the end? The truth is, the voting was totally unnecessary - because only P-chan’s vote mattered. How could he vote, since he can’t speak? He could vote a resounding ‘Yes! I want to live!’ by screaming and kicking when he faces the knife. It is this final scene of P-chan’s life that the kids and the audience never get witness. The teacher truly failed in teaching the kids about the source of their non-vegetarian food - by not arranging an excursion for them to see this.

The P-chan adventure was only half-lived. It does not do justice to P-chan, since it was partially based on a true story. Seeing P-chan go under the knife, not that I want to, could save many more animals. The movie was unfortunately just another desensitised film that failed to deliver greater lessons on respect for life.

When Siddhartha (the Buddha-to-be) was a child, he once rescued a swan shot by his cousin Devadatta. Reluctant to hand it over to him, it was judged by the wise that the swan belonged to those who saw value in its life, not its death, to those who wanted to save it, not to those who wanted to kill it. In this sense, the teacher’s special project to educate on the meaning of life and death had failed… in his own hands. If the kids were to be taught the true meaning of responsibility for P-chan all the way, they ought to kill him personally (since they voted for the death sentence).

Why pay others do the dirty job? Then again, true responsibility would mean not even considering killing as an option. It’s disturbing how the teacher voted against letting the grade 3 students take over when he had the final say over P-chan’s life. Also disturbing was how the pro-life half of the class never spoke up more enthusiastically to win the teacher’s vote. How could they collectively think that an early death is better for a hale and hearty P-chan?

What if sick and aged parents are involved here? Would we send our parents to the slaughterhouse? Also in the Lankavatara Sutra, the Buddha taught that all animals (all beings in fact) had been our parents at some point in time in our many previous lives. Even more disturbing was that the grade 3 students were deliberately concealed from the fact that P-chan would be sent away to be killed.