Singapore -- Shortly before the screening of ‘Handsome Suit’ this year was ‘Penelope’ last year - another real gem of a movie with an alternative but equally brilliant take on the ugly duckling theme. What’s the moral of the ugly duckling story? 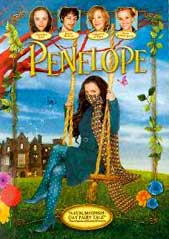 Sometimes, one is not a mere ugly duckling, because one can grow to be beautiful in other ways (e.g. as a swan), because one is not really a duckling in the first place. Penelope, though born of blue blood, is a young girl struck with a family curse, which dictates that her piggy nose will become a normal human one when ‘one of her own kind’ accepts her as she is, till death do them apart.

Now, Penelope is really a nice person, but her over-protective mother decides that she should hide her strange nose from the world, lest she suffers from discrimination.

Her mother goes through meticulous efforts to arrange blue-blooded suitors to ‘meet’ her, but they are mostly ’scared’ away upon seeing Penelope’s nose, despite having had nice chats without seeing her first.

Hmmm… either Penelope looked really monstrous or the suitors were really shallow. If you watch the movie, you would tend to agree it’s the latter! Why judge superficially even after knowing another’s character? One of her suitors claimed that he too felt imprisoned most of his life, by his good looks and name, that no one seems to see past that. He even says that if he was more than his face and name, Penelope must surely be more than hers.

Sweet sweet talk… but alas - when Penelope shows her face, he runs off screaming in irrational fright!

either? There is simply no ’self’ embedded within our body or even mind - because we change from moment to moment. So what is it we really love or hate about someone if it’s not really lasting? Do we only cling to a static image? And it’s useless to think our imperfections are inherited ’sins’ from our forefathers, especially if they can’t do anything to change us. The karmic onus is always on us to personally make peace with or change what we should. What is it ‘waiting to come out’? Our splendid Buddha-nature!

What happens if your most beautiful loved one’s nose suddenly transforms into a piggy one? Will you flee in fear and disgust? Beauty is only skin deep and the skin is not very deep! Well, how deep is your love? Only skin deep? If you were to reflect carefully, no one is really ugly, since it is the mind that demonises. Hence, it is the mind which demonises that is ugly!

Why must the less conventional-looking (or ‘ugly’) be seen as monstrous or assumed evil? The real evil is groundless discrimination - that which is less readily seen within oneself. Penelope too discriminated against her own looks to some extent, which made her comfortably stay out of the world’s sight at first. At one point however, she relinquishes her concerns over her unusual nose and decided that she liked herself as she was… and something amazing happens - her nose became a normal human one. She had lifted her curse with the power of self-acceptance. She too, was after all ‘one of her own kind’ - of blue blood!

Paradoxically, only when there is acceptance of how things are can there be change to how we want them to be. Only when we face our suffering can we overcome it. Penelope had the power of self-acceptance all along. So did her mother, who could had broken the curse by openly accepting Penelope as she was, instead of hiding her from the world. The truth is, without self-acceptance, even being well accepted by many others would be pointless.

In one of the tragicomedic final scenes, Penelope’s mother suggested a little plastic surgery to make her new human nose look even better. ‘Nothing wrong with wanting to look her best… Being her mother… that’s what mothers do with daughters!’ To that, Penelope rolls her eyes in exasperation. Thank goodness her mother’s instance of reversed acceptance did not revalidate the curse! The real curse is is really that of being inflicted with the Three Poisons of attachment, aversion and delusion. As uttered near the end of the film - ‘It’s not the power of the curse; it’s the power you give to the curse!’