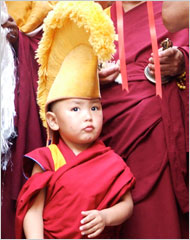 << The young boy believed to be the reincarnation of a Buddhist master in the documentary “Unmistaken Child.”

The young monk’s journey, on foot, by mule and by helicopter, begun at the request of the Dalai Lama, takes him through some of the world’s most spectacular high country, as he travels from village to village, seeking a very young child, 1 to 1 ½, who shows signs of being his reincarnated teacher.

The film, written and directed by Nati Baratz, is a real-life examination of the same rituals and traditions observed in Martin Scorsese’s “Kundun.” Like Mr. Scorsese’s movie, it stands in awe of its subject. The beauty of the landscape and the monk’s sweetness, humility and good humor evoke a plane of existence, at once elevated and austere, that is humbling to contemplate.

That said, “Unmistaken Child” offers no scholarly perspective on Tibetan Buddhism and leaves fundamental questions unanswered. Why, for instance, is the search for the child so limited in scope and not worldwide?

The direction of the smoke from the pyre at Lama Konchog’s cremation and the sand patterns below it offer the first indications of where to search. A Taiwanese astrologer predicts that the child’s father’s name probably begins with an A, and that the most likely birthplace has a name beginning with the letters TS. Everywhere the monk goes, he inquires about the existence of special children who might be the appropriate age. But the film finally doesn’t convey the time and labor spent by the monk. And when the child who may be the reincarnation is located in the Tsum Valley of Nepal, he is obviously older than 1 ½ and can speak well enough to be understood.

Once found, he is tested by monks, who ask him to pick out Lama Konchog’s prayer beads, and his hand drum from a selection. To their relief, he chooses correctly. The Dalai Lama gives his approval, and in the film’s most emotional scene the boy’s head is shaved as he weeps and protests.

His parents must formally agree to give up their child, who is taken to Lama Konchog’s mountain retreat, which has fallen into a state of disrepair. Later he is dressed in red and golden robes and a headdress, and transported in royal style to the monastery, where he will be trained and where he bids farewell to his parents.

As much as it is about the quest for a miraculous being, “Unmistaken Child” is about Mr. Zopa’s painful adjustment to the loss of a master he had served since the age of 7. His search is a crucial initiation ritual that restores meaning and purpose to a life that is suddenly desolate. His tender, playful interactions with the boy reveal him as someone of enormous sensitivity, gentleness and spiritual grace.

“Unmistaken Child” inevitably leads you to consider the material world and to contemplate the balance in your own life between physical gratification and spirituality. The rugged landscape, in which mist filters through craggy cliffs and wild flowers seem to dance in the mountain meadows, suggests that religion and geography are profoundly intertwined. How we perceive the universe, time, death and rebirth has everything to do with altitude and latitude.

Opens on Wednesday in Manhattan.