'Blood'y Demonisation of the Demonic?

Singapore -- In the movie ‘Blood: The Last Vampire’, it was suggested to Saya (the half-vampire human) by her teacher that (vampirical) demons have no souls (in the sense that they have no conscience and are thus not redeemable or worth sparing), that ‘heaven’ put them in our world to test our virtues. 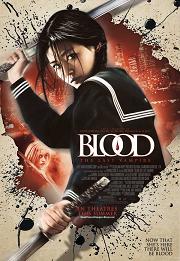 Now, how virtuous can such a ‘heaven’ (or heavenly creator) be, to create weaker beings who need to be tested by powerful evil? Saya wonders why she should slay vampires if heaven intended the demons to live among humans. To that, the teacher asks her not to question, and to just carry out what their ‘duties’. Now, this is a classic portrayal of -

1. Arbitrary demonisation of the demonic (extremely)
2. Arbitrary deification of a creator who might not be there
3. Arbitrary rationalisation for simplistic and dualistic confrontation
4. Arbitrary assumption of ‘holy’ but self-appointed responsibilities
5. Arbitrary ignorance of what are really good questions

Saya remarks that she lives for only one purpose - to kill demons, especially the ancient head of them all - Onigen. But shouldn’t this be the one purpose of a responsible creator instead, if he or she exists, since the mistake of ‘creating’ such malicious evil and allowing it to exist is the creator’s? Then again, the real source of evil is erroneous demonisation, deification, rationalisation, assumption and ignorance within individuals - while lacking compassion and wisdom to transform the demonic for the better without unforgiving violence.

Since Saya’s a half-vampire, Onigen accuses her of having killed many her own kind, while Saya says she is not the ’same kind’ as her - since she’s half human. Coincidentally, ‘Saya’ in the Malay language means ‘me’. Saya is ‘me’ and’ ‘we’ too - who are half-demonic, since all unenlightened humans are capable of evil! Demons then, must have a humane side too.

Onigen exclaims that Saya assumed that killing more demons made her more human, while it made her more demonic instead, that killing her, who is the ’source’ of demons would mean she would replace her. This reminds us of the Buddhist teaching that Mara, the most evil of beings in any world system at any one time, is but a position filled by different beings over time. Even Mara can repent and become a Buddha with sufficient Dharma practice! By the end of  the story, we’re unsure if Saya does become the new Onigen. As Friedrich Nietzsche famously warned,

‘Whoever fights monsters should see to it
that in the process he does not become a monster.
And if you gaze long enough into an abyss,
the abyss will gaze back into you.’

And alas! For you might then become one with the darkness and forget the light of truth and goodness! In Buddhism, there is just the need to focus on the opposite of the abyss, to go towards the light, and to guide others in the dark towards it. The more one goes towards the light, the more will darkness yield. There is no need to fight the poison of hate with hate, which would be adding fuel to the fire; while the true antidote for hate is loving-kindness (Metta), which is the basis of compassion. Hold the luminous gem of Metta wherever you go and you will light up the darkness. Since Metta accompanied with the torch of wisdom that dispels the darkness of ignorance will save the day, why spill any blood?