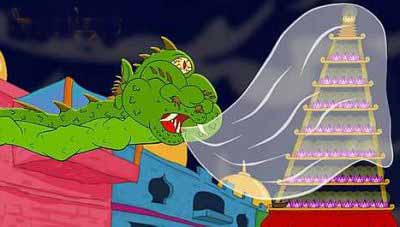 << Tale of devotional offering: Mara, the evil one, blowing with all its might to extinguish a tower of oil lamp offerings.

The Oil Lamp clinched the first prize in the International Short Film Competition while The Abbot & The Orphan – The Shrine, Ep 1 received a merit award (the only merit award given by the organising committee) as it exceeded the 12 minute restriction for each short film. Both films were by Malaysian director Ng Lid Sine.

Satoshi Hirayama took second prize for his entry entitled Heart Sutra, a video poetry of the sutra that depicts oneness with the universe. Another Japanese director, Kazuhiko Mizushina, won third prize for Sneakarma, a black comedy, which tells the story of a youth’s intense attachment to sneakers.

Seven shortlisted entries for the International Short Film Competition were showcased on Sri Lanka’s national television during the duration of the film fest. It is hoped that the film fest will continue to grow annually culminating to a grand event in time for the celebration of 2,600 years of Buddhism in 2011.

Ng, 47, director of Cartoon Workshop, received the awards in a ceremony at the New Theatre of the National Film Corporation Sri Lanka in Colombo on June 16. The Oil Lamp tells the tale of a devotional offering of light to Buddha by an old beggar woman. Her devotion is so strong that even Mara, the evil one, is defeated.

“The animation was done some years ago, hence the retro feel to it,” Ng explained. “Characters were based on Indian comic styles with a bit of Asterix thrown in. It took us about three months to complete it,” says Ng.

“The moral behind this nine-minute animation is not how much you give but how you give it.”

The Oil Lamp, says Ng, has never been shown to the local Buddhist community but was presented once to the late Chief High Priest of Malaysia and Singapore, Ven Dr K. Sri Dhammananda.

“The BISDS is continuously searching for ways to propagate the Buddha Dhamma (the Buddha’s teachings) in line with its 80th anniversary theme, ‘Dhamma in Motion’. This animation will most likely be among the movies that BISDS will screen from time to time.”

Presently, Ng is working on a local animated television series and The Abbot & The Orphan animation series, which revolves around an orphan who is cared for by an old and blind abbot.

According to a press release, the Chief High Priest of Malaysia Ven K. Sri Dhammaratana Nayaka Maha Thera was instrumental in getting the films submitted for the competition. He was happy with the success of the BISDS’ first foray in film production and hoped that the BISDS will receive more support for future film productions.

The BISDS principal, Ven. K Sridhamma Thera, said: “The two animated films which were co-produced with Cartoon Workshop were projects undertaken by the BISDS to propagate the Dhamma in its outreach programmes.

“We hope to produce more contemporary productions to enable us to reach out and touch the young minds who have embraced the digital world.”

The BISDS was established in 1929 by Sasana Abhiwurdhi Wardhana Society with the aim of educating children on the Buddhist teaching. It celebrated its 80th anniversary this year and is the oldest Buddhist Sunday School in the country.

To view The Oil Lamp, go to:
youtube.com/watch?v=MMTwqqZTSzk or bisds.org/blog/?p=260