Singapore -- Though the award-winning Sankara was the opening film of Singapore’s International Film Festival in 2007, it was so stunning in impact that it is again shortlisted, as a feature film for 2009’s T.H.I.S. Buddhist Film Festival (http://www.thisfilmfest.com) on 17 September. Sankara was also featured in film festivals in Thailand, the Philippines, Egypt and UK. 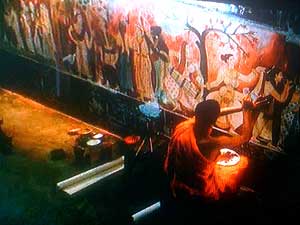 Filmed in a paradoxically minimal yet lush way, Sankara is filled with sparse yet essential settings, with rich colours playing to a hauntingly reverberating soundtrack. Its cinematography has also been hailed as probably the best in Sri Lankan cinema history. Not only is it meditatively paced, it is a meditation itself – on the nature of desire. Right from the mysterious opening sequence (which makes total sense by the end), one knows that an extraordinary treat for the eyes, ears and mind await.

Sankara tells the tale of young monk Ananda, who visits a temple to restore its rundown ancient murals, which depict the Thelapaththa Jathakaya, a story told by the Buddha on how one with a king’s lofty mission should not be swayed by sensual desires. As an ironic parallel, while his mission was to revitalise this faded half-forgotten cautionary tale, Ananda faces temptations embodied by the presence of a young woman living near. The director Prasanna Jayakody had let some 400 Sri Lankan monks review his film, because it was crucial not to offend the Sangha community – since a ‘monk’ was featured as the protagonist. The outcome? There were no objections! Filled with picturesque postcard perfect scenery, subtle symbolism, and a few classic Zen stories retold, Sankara presents a magical melding of Theravada and Zen culture.

The truth is, Sankara is not exactly about Buddhism; but the universal problem of conflict in the mind. The lead could well be a layperson on the verge of breaking any moral precept. However, a monk was used to more clearly illustrate moral boundaries not to be crossed. The director remarked that there are only three key characters in the film – the monk, an anonymous layman (who represents his alter ego, who keeps straying off towards worldly attractions) and the paintings. In short, the trio respectively represents the meditator, his mind and the subject of meditation! When Ananda gets distracted from his painting, that is when his alter ego becomes his inner Mara (demon). While he might appear composed, his alter ego betrays his wandering mind.

Ananda is not exactly unmindful though. He carefully frees a grasshopper out of compassion. He pats a puppy. He feels the coarseness of the walls of his hut, the texture of the murals. However, he is also the attached to his art, to colours and form – perhaps reflecting the attachment of the filmmakers? He picks up the woman’s hair pin… but in his half-hearted attempts to return it, he realises he has repressed lust for her. We see him in spiritual turmoil as she personifies the very sensuality that the murals warn against. Subtly, he struggles between wanting to return the pin, which would symbolise letting go of his attachment, versus wanting to keep it, as an excuse to keep seeing her. Meanwhile, he knows that she knows about this – or was it just his fantasy?

Toggling between being tormented and being indulgent in the sexual tension, Ananda seems to await for opportunities to get closer, yet unsure of what he wishes to do. Truth is, he could simply dissolve the self-chosen conflict by befriending her with equanimous loving-kindness. That would be the Middle Path between the extremes of suppressing denial of interest and bluffing total disinterest. What is ’sankara’ (a Pali term)? As the Buddha taught in the Dvayatanupassana Sutta, ‘Any dukkha (dissatisfaction) that comes into play is all from sankara (mental fabrication) as a requisite condition… With the tranquilising of all fabrications, with the stopping of perception: that is how there is the ending of dissatisfaction.’

Ananda is urged to ponder if painting mural nudes was alright for a monk, remarking that drawing is not a meditation for him. Was it then a distraction from his spiritual practice? But if he was wholly mindful of the drawing process without getting lost, it could be meditative. As an old monk who praised his drawing put it, drawing in itself is not a misgiving – even if the subjects are seductive nudes. Forms are neutral, it is our sankara which stir up afflictions over them by creating attachment or aversion. He then passes him a meditation manual on contemplation of the stages of the body’s decay. As he uttered earlier when they attended another young girl’s funeral, ‘Age has no significance to death.’ If so, our bodies are but transient and fragile vehicles, best geared towards enlightenment.

When Ananda does not confront his Mara, the latter takes on a life of his own. While he is physically often in the temple, his Mara stays on its fringes. Perhaps it is unrealistic to expect all monastics to be able to instantly drop all worldly attachments when they enter monkhood. The renunciation of defilements does take time – thus the need to practise the Dharma. The same applies to the laity. Ananda was supposed to had left where he formerly stayed because he was unhappy with that life. Little did he expect to arrive at an idyllic temple, only to discover his own dark side. In the midst of Samsara, true sanctuary must first be found within. As the story proceeds calmly, it takes a few surprising turns, before culminating in a truly unforgettably illuminating twist. Sankara at play!